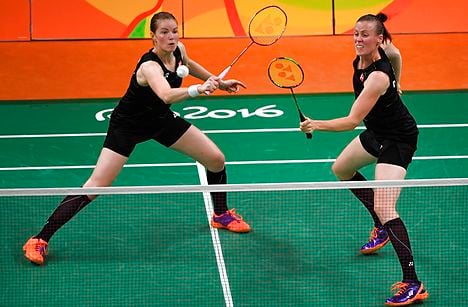 Denmark's Christinna Pedersen (L) and Kamilla Rytter lost to Japan's Misaki Matsutomo and Ayaka Takahashi in the women's doubles final in Rio on Thursday. Photo: AFP/GOH CHAI HIN/Scanpix
The Japanese duo sensationally came from behind to defeat Denmark's Christinna Pedersen and Kamilla Rytter Juhl 18-21, 21-9, 21-19 in a thrilling encounter.
The match was locked at 16-16 in the final game as the Danes and Japanese traded point for point. Denmark raced ahead to 19-16 and looked like they were heading for victory, only to be stunned by their counterparts.
Japan won four points on the bounce to go 20-16 ahead, eventually edging the game by just two points.
“We gave it everything we had. I just wish we could turn back time to when it was 19-16, because that's when it went too quick for us,” a disappointed Pedersen told TV2 Sport.