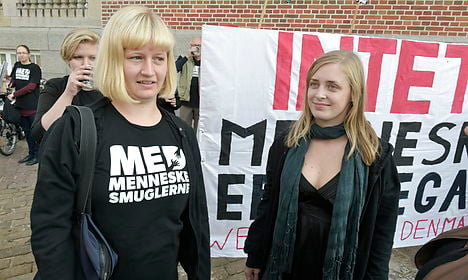 Anne Hegelund (L) and Maria Sloth (R) arrive at Aarhus City Court on Tuesday. They face charges for giving migrants a place to stay. Photo: Axel Schutt/Scanpix
The councilwoman, Maria Sloth of the far-left Red-Green Alliance (Enhedslisten), and her roommate, Anne Hegelund, opened their doors to the two refugees in September 2015, as Denmark experienced a wave of migrants.
The two women gave the Africans a place to sleep for the night and then bought them tickets to take a ferry to Norway the following day.
When Sloth later shared her story with local newspaper Aarhus Stiftstidende, her fellow council member, Marc Perera Christensen of the Conservatives, filed a police report saying that she and Hegelund, who is  also an Enhedslisten politician and hopes to be elected to parliament, had violated immigration laws by helping people who were in the country illegally.
“We’re talking about the intentional facilitation of illegal transit and residence and therefore we are making a claim for detainment,”  the prosecutor in the case, Jacob Balsgaard Nielsen of the East Jutland Police, said in court on Tuesday, according to Ritzau.
See also: Danish activist convicted for helping migrants to Sweden
Nielsen said however that if the court finds that September’s influx of refugees and migrants constituted “special circumstances”, he would be willing to settle for a 5,000 kroner fine.
Sloth did not speak in court on Tuesday according to Ritzau but she and Hegelund have previously defended their actions on humanitarian grounds.
“We had space in the house and we didn’t discuss whether it was legal or not. We just followed our conscience,” they previously told Aarhus Stiftstidende.
Earlier this week, Sloth told Ritzau that they did not regret their decision.
“I think it is very strange that we have a law saying you have to go to court for helping people. We never doubted that we did the right thing by letting them sleep here,” she said.
See also: Danish family man slapped with fine for helping refugees
Their lawyers are arguing that the two women should be acquitted since there is no evidence in the case except for Sloth’s own comments to the press. They also say that police have not been able to prove that the two Africans were in Denmark illegally.
A decision is expected on August 26th.
Earlier this year, a Danish activist and her journalist husband were each fined 22,500 kroner for helping a Syrian family en route to Sweden to seek asylum during September's migrant rush. Similarly, a Danish family man who transported four Afghan migrants was ordered to pay a fine of 5,000 kroner.