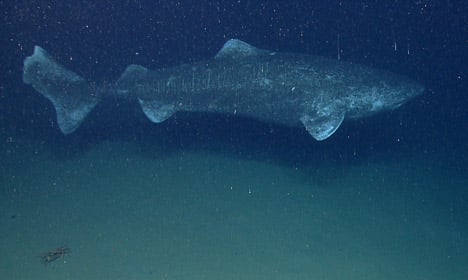 A Greenland shark. Photo: NOAA Photo Library/Flickr
Their slow growth rate — about one centimeter per year — contributes to their exceptionally long lives, beating out other well-known centenarians of the animal world such as the bowhead whale and the Galapagos tortoise.
In fact, only one species of clam is known to live longer, said the study in the journal Science, adding, “The life expectancy of the Greenland shark is exceeded only by that of the ocean quahog (Arctica islandica, 507 years).”
Known formally as Somniosus microcephalus, the Greenland sharks are the largest fish native to Arctic waters.
They also take a very long time to reach sexual maturity — about 150 years, said the report.
The study relied on radiocarbon dating techniques, applied to the eye lenses of 28 females caught unintentionally by fishermen seeking other species.
Researchers can learn about the age of marine creatures by finding traces of atomic radiation in their tissues, resulting from atmospheric tests of thermonuclear weapons since the mid-1950s.
They found that the two largest sharks in this study, at 493 cm (16 feet) and 502 cm (16.5 feet) in length, “were estimated to be roughly 335 and 392 years old, respectively.”
The Greenland sharks' average lifespan is believed to be about 272 years, said the study, which had co-authors from the Greenland Institute of Natural Resources, the National Aquarium Denmark, the Arctic University of Norway, Indiana University-South Bend, the University of Oxford, and the Virginia Institute of Marine Science.