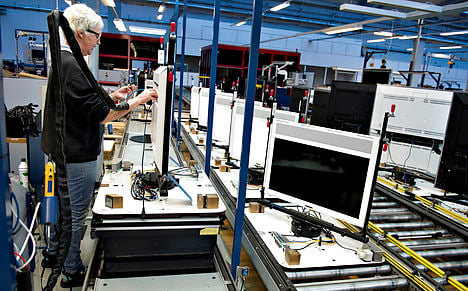 Bang & Olufsen's facilities in Struer. Photo: Henning Bagger/Scanpix
The maker of high-end consumer electronics said the net loss for its financial year to May was 208 million kroner (€28 million, $31 million), with more than half of the annual loss clocked up in the fourth quarter alone.
Bang and Olufsen said, however, that sales rose by 12 percent and its gross operating margin was 36.1 percent, but high costs meant that this was not enough to drag the bottom line into the black.
The company said it expected a better performance in the current year on the back of recent products and cost-cutting.
The maker of upmarket sound systems and televisions, founded in 1925 and known for its clean Nordic designs, has posted annual operating losses over recent years as more people listen to music on mobile devices.
In April it pulled the plug on takeover talks with a Hong Kong investor who had appeared willing to throw it a lifeline. But in the end, it decided that billionaire Qi Jianhong's holding company Sparkle Roll was not in a position to substantiate its initial offer.
It then hired Henrik Clausen, most recently the global head of strategy at Norwegian telecom group Telenor, to replace Tue Mantoni, who took the helm of Bang & Olufsen in 2011.
Bang and Olufsen has been concentrating on developing its successful B&O Play range of light and mobile devices, cutting down its costly retail network and lowering production costs.
In mid-session trading on the Copenhagen stock exchange Thursday, shares in the company were down 1.4 percent at 72.50 kroner, sharply underperforming an overall stronger market.