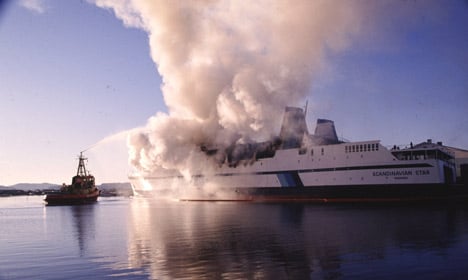 The fire killed a third of the 482 people on board. Photo: Tor Arne Dalsnes / SCANPIX
On Tuesday, Oslo Police said that a new two-year investigation is being dropped after having found no proof of insurance fraud or new arsonists.
The decision ended the new inquiry into the 1990 Scandinavian Star ferry fire which killed 159 people as it sailed overnight between Oslo and the Danish port of Frederikshavn.
“In this kind of affair this complex, dating back 24 or 26 years, … we can unfortunately not expect to have answers to all the questions,” police commissioner Hans Sverre Sjovold told reporters on Tuesday.
The group “Foundation for Arson Investigation into Scandinavian Star” immediately contested the inquiry's conclusions, with one member of the group accusing the police of having removed vital photographs from the investigation materials.
Group spokesman Terje Bergsvåg said he was considering filing a legal complaint against the police for withholding information.
On Wednesday, the Danish Association for Scandinavian Star (Scandinavian Stars Danske Støtteforening) said it too would file a complaint over the Tuesday’s decision.
Mike Axdal, a Danish survivor of the fatal fire, wrote in a press release that he wants the Oslo Police to proof certain claims in a court of law.
Blame for the 1990 fire was initially placed on a Danish trucker who had previously been convicted of arson attacks and who perished in the ferry blaze, but there was not enough evidence against him.
Norwegian police reopened the investigation in 2014 to examine claims that the fire was part of an insurance fraud scheme.
Experts and families of the victims had noted that several fires flared up on the ferry after the trucker's death, and suggested the blazes were set as part of an insurance fraud.
In February, the former head of the Danish maritime transport authority, Flemming Thue Jensen, accused two crew members of causing the blaze and slammed Norwegian police for not being able to solve a case that should have been “as easy as bicycle theft”.
Jensen said that iron bed frames were arranged to keep fire doors from closing, allowing the main fire to spread throughout the ship. Likewise, a door to the upper car deck was also propped open to supply the fire with more oxygen. Jensen also said that there was a third fire set that broke out nearly 12 hours after the main fire, well after the ship had been evacuated and only a few crew members remained.
After two years of additional investigations, Norwegian police said on Tuesday they had found no new evidence to support an indictment or theories of sabotage and insurance fraud. The smaller fires observed after the trucker's death were likely caused by the extreme heat on the ferry, police said, citing technical experts.