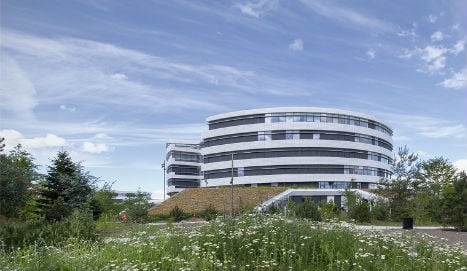 Novo Nordisk's headquarters in Bagsværd, outside Copenhagen. Photo: Novo Nordisk
In the United States, negotiations with pharmacy benefit managers — the firms that manage prescription drug services between health insurers and insured patients — for 2017 “have reflected an intensifying price competition,” chief executive Lars Rebien Sorensen said in a statement.
“In spite of this, we see significant growth opportunities based on our strong diabetes care portfolio,” he added.
Sales were expected to grow by between five and seven percent in local currencies this year, rather than a previous estimate of five to nine percent, the company said.
Operating profit was expected to grow by between five and eight percent in local currencies, down from an earlier prediction of five to nine percent. Net profit in the second quarter rose 19 percent to 9.97 billion kroner
(1.34 billion euros, $1.49 billion), compared to a Bloomberg analyst estimate average of 9.91 billion kroner, as revenue edged up one percent to 27.46 billion kroner.
Sales growth of Victoza, which controls blood sugar levels by mimicking an intestinal hormone called GLP-1, and once-daily insulin Tresiba continued to be strong in the first half of the year, Sorensen said.
Sydbank analyst Soren Lontoft said price pressure in the United States wasn't “that surprising”.
The United States “is still going to be a very, very lucrative business for Novo Nordisk in the next several years,” he told Danish news agency Ritzau.
The number of adults estimated to be living with diabetes nearly quadrupled between 1980 and 2014 to 422 million, according to the World Health Organization.
Novo Nordisk holds a 46 percent share of the international insulin market. Shares in the company were 0.27 percent lower in late morning trading on the Copenhagen stock exchange, where the main index was 1.48 percent lower.