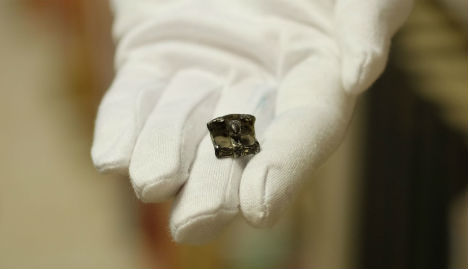 The tiny amulet was made of silver. Photo: Museum Lolland-Falster
Amateur archeologist Torben Christjansen, who has devoted about 300 hours to his hobby, made the find in a field in Nybølle, just outside Copenhagen.
At first he didn’t know that the silver amulet, which depicts a throne with two ravens on the back-rest, was a Viking age jewellery.
It was only when he posted it up on an archeological finding that its importance was recognised.
“This is an incredibly exciting and rare find. We only know of two similar amulets,” Anders Rasmussen, curator of the Museum Lolland-Falster told TV2 Denmark.
According to Peter Pentz, a Viking expert at the Danish National Museum, fewer than 20 chair amulets have been found in Scandinavia.
He said the ravens probably depicted Huginn and Muninn, the two ravens of the Norse God Odin, which mean respectively “thought” and “memory”, and who are tasked with flying all over the world to keep Odin informed.
“It is fantastic,” Christjansen said. “There have only been three like this found here in Denmark. After this discovery, I think right, I'm going out to look twice.”
Christjansen is now required by law to send the amulet to the National Museum for analysis.
Metal detectorists have been behind some of Denmark’s most spectacular recent finds, in March discovering a 1,100 year old gold crucifix that is thought to be the oldest complete Christian artefact ever found in the country.
Url copied to clipboard!