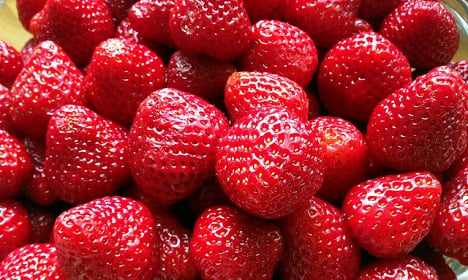 Naïve as it may appear to nationals of many other countries, it is fairly common to see unmanned booths and shacks in the Danish countryside where customers are trusted to leave cash in a tray or collection box to pay for the produce they take.

But when the villagers of Saltum noticed that their trust was being abused by two men who had been raiding their booth for three days in a row and stealing all the cash left by other customers, they decided it was time to take action.

When the suspects returned on the fourth night on Tuesday, they had no idea they were walking into an elaborate trap set by the cunning villagers.

As the villagers had expected, one of the suspected thieves snuck unto the shack late in the night to steal whatever cash had been left by the customers that day, unaware that he was being watched by a group of locals lying in wait and armed with only a plank, screwdriver and lots of moxie.

As soon as the man was inside, they rushed over to the shack and used the screwdriver to attach the plank across the door, trapping the presumably bewildered man inside.

Realising his partner was in trouble, the other suspect attempted to escape in their car, which he crashed shortly after.

The accident may have been engineered by the shrewd villagers, who had also constructed and deployed spike strips made from wooden planks and nails along the road for just such an eventuality.

The second suspect then attempted to escape on foot, but a police canine patrol arrived to apprehend him – as well as his partner, trapped in the shack – shortly after.

“The residents had trapped one of the two men inside the shack, so we arrested him quickly. The other of the two men made a run for it, but the police caught him too, so we made two arrests,” Bruno Brix from the North Jutland Police told Ekstra Bladet.