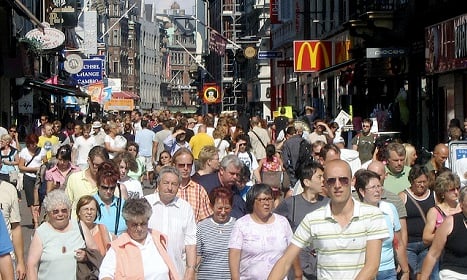 The Danes have always been a pretty tall people, but according to new findings published in medical journal eLife on Tuesday, they have been soaring to even greater heights compared to the rest of the world over the last century – despite the latter’s best efforts to catch up.

Some 800 researchers from global health science network NCD Risk Factor Collaboration, in association with the World Health Organization, mapped out the height of 18-year-olds in 187 countries and tracked their average growth curve between 1914 and 2014.

Danes were found to be the tallest people in the Nordic countries, with Danish men coming in at 5th place on the global ranking and Danish women in 7th. Danish men born in 1996 are nearly 182cm tall on average, while Danish women born the same year are about 167cm tall.

In comparison, Swedish men and women, once the world’s tallest, have tumbled down the rankings to 15th and 17th place, respectively.

The study found that Dutch men are today the tallest, narrowly beating their Danish counterparts at almost 183 centimetres. The most impressive women meanwhile, measuring on average 170cm, are to be found in Latvia. A hundred years ago the two countries were only 12th respectively 28th tallest in the world. Generally, the tallest people in the world are concentrated in northern and eastern Europe.

While still shorter than Europeans, Iranian males have enjoyed the biggest height gain in 100 years, from 157cm to 174cm. For women, it's the South Koreans, up from 142 to 162cm.

The smallest men in the world are found in East Timor (160cm) and the smallest women in Guatemala (140cm a year ago, just below 150 today).

Researchers said the reasons were largely down to environmental factors – such as healthcare, nutrition and sanitation – rather than DNA.

“About a third of the explanation could be genes, but that doesn't explain the change over time. Genes don't change that fast and they don't vary that much across the world. So changes over time and variations across the world are largely environmental. That's at the whole population level versus for any individual whose genes clearly matter a lot,” lead scientist Majid Ezzati, from Imperial College London, told the BBC.

According to Professor Kim Fleischer Michaelsen from the Department of Nutrition, Exercise and Sports at Copenhagen University, size – well, height, at least – does matter.

“By and large, there is a correlation between your height and how much you earn and your life expectancy. Height also appears to have a positive influence on a person’s cognitive skills, but that is a sensitive subject that is difficult to discuss because everyone knows short people who are very smart,” the researcher, who was part of the international study, told Berlingske.

According to Michaelsen, the Danes’ secret may very well be their high consumption of milk.

“Our hypothesis is that it has to do with a high intake of animal proteins, particularly milk. We have conducted studies where we gave seven-year-old boys a lot of milk or a lot of meat, and found that milk in particular had an influence on height development. This does not mean that we are encouraging mothers to force their children to drink too much milk, however, as there can also be negative effects associated with high milk consumption. Generally, it is about maintaining a sensible balance between consumption of plant-based and animal proteins.”

A list of the top ten countries for both genders can be seen below.