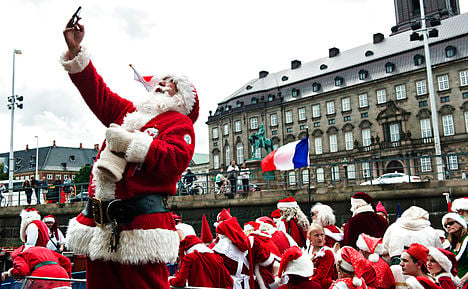 No big deal, just a Santa taking a selfie while on a Copenhagen canal cruise in the middle of the summer. Photo: Mathias Løvgreen Bojesen/Scanpix
Santas from all over the world are once again gathered in Copenhagen these days for the World Santa Claus Congress, hosted by Bakken amusement park.
More than 100 people dressed up as Santa Claus (or ‘Julemanden’), Mrs. Claus or elves arrived in the Danish capital on Monday to take part in the annual activities, which officially concluded on Wednesday.
The meeting dates back to 1957 and the Santas use the occasion to spread summertime Christmas cheer and trade tips on how Christmas is celebrated in their part of the world.
Attendees this year came from as far away as China and Japan. But one couple who did not make the pilgrimage were Swedes Jonny Ekdahl and Anna Kuylenstierna, who told The Local they were boycotting this year's event after being berated by a drunken Danish Santa at an earlier congress.
Those who did make the journey to Copenhagen this year took in the capital's sites, much to the delight of other tourists. Click on the photo below for a full gallery of the bearded, jolly action. Click through on the photo for a full gallery of shots of the World Santa Claus Congress. Photo: Mathias Løvgreen Bojesen/Scanpix