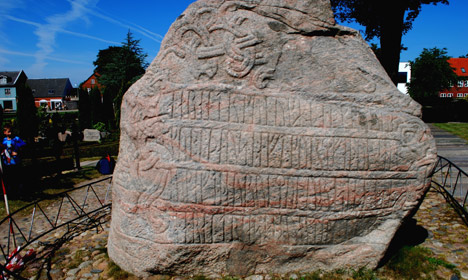 One question focuses on the inscription on Harald Bluetooth's rune stone. Photo: Erik Christensen/WikiCommons
These questions are not drawn from an admission test to a prestigious university but from Denmark's renewed exam for anyone aspiring to get Danish citizenship.
The Danes-to-be — or rather wannabes — have 45 minutes to answer the intensive multiple choice questionnaire covering the Scandinavian kingdom's history, culture, politics and habits from Viking times to the modern era.
The test can be a gamble for migrants, many of whom are unschooled and striving to decipher the country's tricky language.
And even Danes, who have had a go at the test for fun, have struggled to attain the minimum of 32 correct answers out of 40.
More than two out of three foreigners who gave it a shot in June's session failed the test, figures from the immigration and integration ministry revealed.
Those who failed will be given a second chance in December.
See also: Two thirds failed new Danish citizenship test
'Applicants not studying'
Integration Minister Inger Støjberg, who has in the past few months signed a series of reforms restricting foreigners' entry and stay on Danish soil, said 35 of the correct answers are included in material distributed to applicants free of charge before the test.
“The relatively high failure rate is due to people not preparing themselves properly and studying the material that is available to all,” she said.
Foreigners are questioned about the adoption of female suffrage, taxes, electing members of parliament, the queen's role in politics or reinstatement of border controls during the migrant crisis in January 2016.
They are also asked if following a religious belief exempts them from respecting “other rules that prevail in society”, in addition to several questions about the successive invasions and wars fought on Danish territory.
The predominantly Lutheran country has also thrown in a few questions about its religious identity, including the one about Easter eggs — to which the correct answer is that they represent fertility.
While major events in Danish history may be useful for new citizens to learn, critics say other questions do little to assess the candidates' integration into their new home country.
'Humour and humanity'
The trivia that foreigners are expected to know includes the release year of the Olsen Gang, a popular Danish film series (1968).
One of its lead actors, Morten Grunwald, admitted even he could not remember when the first film had been released.
“A test like this should not define if one can become a Danish citizen or not. It's about other qualities, such as humour and humanity,” Grunwald told broadcaster DR.
And when it comes to La Sylphide, few Danes would recall that Auguste Bournonville's ballet from 1836 tells the story of an unfortunate young Scotsman who abandons his fiancee for the ethereal beauty of a sylph and ends up losing both.
“The Danish government is doing what it can to avoid receiving too many people from outside, both refugees and regular immigrants,” Luc de-Visme, a 70-year-old Frenchman who has lived in the country for 44 years and who sat for the test, told AFP.
Although he ended up passing, he admitted having guessed the answers to eight of the 40 questions.
For citizenship-seekers the grilling does not end at the general knowledge test. Then come the language exams, both oral and written.
Linguist Poul Neergaard said Danish is more difficult to learn than many other languages, not least because Danes barely pronounce their many vowels.
“We swallow half of the words,” he said.
'Knowledge not memory'
When the general knowledge test was first introduced in 2007 by a centre-right government, the failure rates were even higher than now.
In 2014, the former centre-left coalition made the questions easier and focused the test more on modern Danish society than obscure historical information.
See also: New citizenship test a piece of cake: expats
But throughout last year, tens of thousands of migrants arrived in or transited via Denmark, prompting the government to join forces with the far-right Danish People's Party to tighten the screw in the citizenship test, among a slew of measures destined to make the country less attractive for migrants.
Even the opposition Social Democrats were in favour of a stricter test but claim not to have had a role in choosing the questions.
“We wanted to see if the applicants knew a little about the Danish culture and history, not if they have a good memory,” Social Democrat lawmaker Mattias Tesfaye told AFP.
And Harald Bluetooth's stone: The inscription says the king brought Christianity to the Danes.