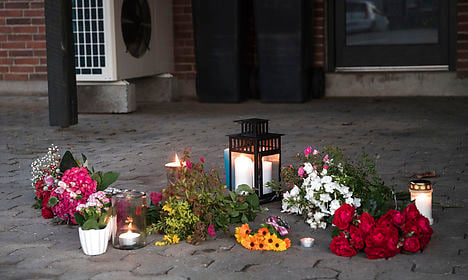 Låsby, 13th July 2016: Flowers left outside of the house of Kirsten and Jørgen Kragh, who were found dead in their son's car. Photo: Bo Amstrup/Scanpix
The former soldier, who was arrested by police Tuesday evening, has pleaded not guilty at a preliminary hearing in court in Randers, reports Jyllands-Posten.
Forty-two year-old Lars Kragh is charged with killing his parents by hitting them repeatedly with his fist and with an axe.
The veteran was also charged with improper conduct with corpses after driving with his dead parents in his car until being arrested on Tuesday.
The preliminary hearing took place behind closed doors before being opened to the press for the reading out of the charges and custody order.
Kragh appeared confused and upset as his defence lawyer stated that he would plead not guilty, reports Jyllands-Posten.
Judge Astrid Lohmann Knudsen recommended that Kragh be kept in custody in a psychiatric hospital, with a doctor having diagnosed the 42 year-old as as 'acutely mentally ill or in a similar state'.
“I can see that it looks strange to drive around with two bodies for so long. But I just didn't know what to do with them… Why the psychiatric department? What is supposed to be wrong with me?” Kragh said in response to the judge, as reported by Jyllands-Posten via Ritzau.
Fellow war veteran Lars Esbensen, who was also present at the hearing, told Jyllands-Posten that he had attended to show Kragh that he was not alone.
“It is terribly tragic, what he did, but he has not been himself,” said Esbensen, who, like Kragh, served in Bosnia during the 1990s Yugoslav wars.
Kragh had been wanted by police since Sunday and is reported to have suffered with post traumatic stress disorder (PTSD) after his active military duty.
Police appealed to the public for help in finding the man along with his parents after they were reported missing on Saturday.
He was arrested near Horsens after a member of the public reported having seen his car, a Grey VW Golf. In a statement, East Jutland Police described the arrest as “undramatic”.

The former soldier and his parents were originally reported to the police as missing by concerned relatives after they had not been heard from in several days, according to Politiken.
After searching the man's home, police found evidence leading them to suspect the family may have been in danger.
Yvonne Bramsen of the helpline for the Military Constable and Corporal Association (Hærens Konstabel og Korporal Forenings livline) told TV2 Østjylland that the man had suffered from PTSD since returning from active duty and that both he and his parents were known in veteran circles, where they have sought help previously.