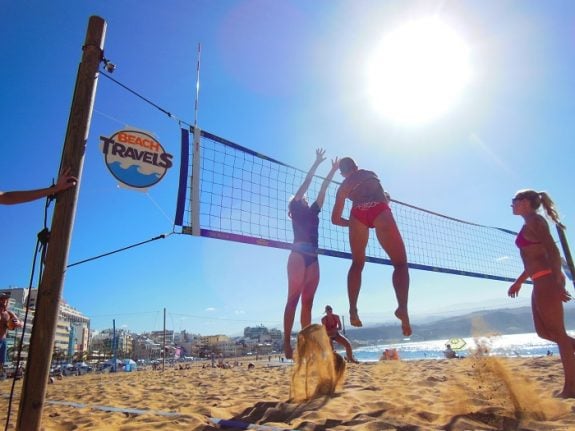 But a growing number of Swedes have their own image: Gran Canaria.

“Last winter we had a large group of real estate salesmen join us for a conference,” says David Cabrera, the Swede behind company Beach Travels.

Granted, the group held their presentations and conference activities at a hotel facility, rather than the beach itself. But that’s one aspect that makes the island of Gran Canaria so perfect for business events, David says – it’s close to everything.

“We have an amazing beach, one side with surfing, and one side more tranquil and slow,” he says. “Las Palmas is so close, and it’s a fun city with good shopping, and there are always fiestas going on. It doesn’t take long to walk up into the mountains, but there’s an edge, a city pulse.”

David, who grew up spending half of his time in northern Sweden and half in the Canary Islands, has a special connection to the island.  He spends most of his time there playing beach volleyball, since that’s what his company is all about.

But the island itself, he argues, is actually one of the best environments in which to learn anything.

“If I just wanted my staff to shut up and listen to a PowerPoint, I would probably book a conference at a hotel nearby in Sweden,” he admits with a grin.  “But Gran Canaria has so much more to offer.”

He and a friend started The Beach in Sweden in 2006 – and while it might sound like a bad reality show, it’s actually a unique indoor beach volleyball centre in Södertälje, just south of Stockholm. Those seeking the feeling of sand between their toes while they sweat and dive to hit the ball can enjoy the centre all year long – whether for fun, sport, or even a work conference or event. “Beach volleyball is obviously an outdoor sport,” David laughs. “But since it’s quite cold in Sweden, an indoor centre is necessary. And people actually tell us they feel like they’re on vacation when they come here.”

But why stop there?

“The real thing is always better, and we wanted to show people how beach volleyball is really played. So we started our sister company, BeachTravels.”

Find out more about work and play in Gran Canaria

The name says it all: participants travel to a beautiful beach, such as Las Canteras in Las Palmas, and spend their days playing volleyball.

Many participants are serious beach volleyball players who are preparing for the international season. Others simply go to play. And others go for work. Why not?

The island’s strength, he says, lies in all the activities available – not just beach volleyball.

“Talking is good,” he chuckles.

A beach is not a place for a passive conference, he notes. But for those seeking an active experience, in contact with nature, sightseeing, walking, beach volleyball, stand up paddle, diving, fishing – Gran Canaria can’t be beat.

“And if you want people to join you on your journey you have to make them a part of it.”