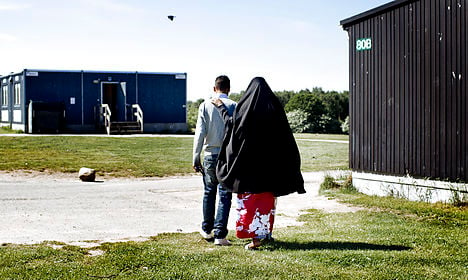 Temporary refugee accommodation in Blovstrød. File photo: Bax Lindhardt/Scanpix
Data published by the Danish Refugee Council shows that the number of people accepting the offer of 131,242 kroner ($19,451) has fallen from 261 in 2011 to 152 in 2015.
Now both government and opposition parties are looking into reforming the repatriation scheme, according to a report by Berlingske.
“It is possible that the 'carrot' offered to return home should be bigger, but the scheme is very generous as it is,” Peter Kofod Poulsen, acting immigration spokesperson with the right wing Danish People's Party (DF) told Berlingske.
“Some countries should be pressed economically into taking back citizens who can easy return home when there is peace,” Kofod continued.
The governing Venstre Party's acting political spokesperson Louise Schack Elholm also said that the effectivity of the scheme should be increased.
“We also want more people to return home,” Elholm told Berlingske. “We have suggested that the funds could be linked to state support for developing countries [diverting funds assigned for aid to developing countries to the scheme, ed.], and have not ruled anything out.”
Mattias Tesfaye, member of the opposition Social Democrats' immigration committee, said that information campaigns could be the key to improving the success of the scheme, adding that changes to they way it is funded may be necessary.
“We neither dismiss a discussion of the actual amount or the limit on existing fortunes that makes up part of the rules for the scheme,” Tesfaye said to Berlingske.
“We are also open to discussing how to use state funds for developing countries to force other countries into taking back their citizens,” said Tesfaye.
The number of people granted asylum in Denmark has increased significantly over the last five years, from a total of 2,249 people in 2011 to 10,849 today.
The Danish Refugee Council's statistics show that, of the 152 people that accepted the repatriation of in 2015, 53 were from Bosnia and Herzegovina. One Syrian citizen left Denmark under the scheme along with eight Iraqis – a huge drop from 87 in 2011.
Andreas Kamm, General Secretary of the Danish Refugee Council, told Berlingske that the conflicts in Syria, Iraq and Afghanistan made it unsafe for people from these countries to return home for the 'foreseeable future'.
Denmark would therefore be unable to withdraw asylum for individuals from these countries without breaking international conventions.
“I am often perceived as someone who fights for more and more refugees coming to Denmark and staying here forever. But my fundamental view is that refugees should be given protection for the entire period they need it. And that the ideal solution for most refugees is to be able to go home,” said Kamm.