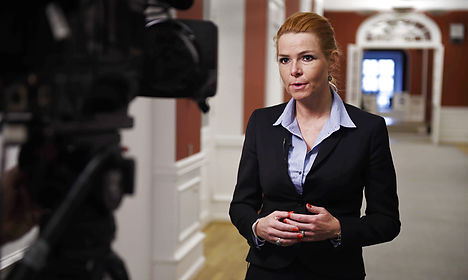 The Institute for Human Rights said that Inger Støjberg's plans are illegal. Photo: Liselotte Sabroe/Scanpix
Integration Minister Inger Støjberg announced last month that immigration authorities would “disregard” the 26-year rule, which gives dispensation to the ‘connection requirement’ (tilknytningskravet) in family reunification cases to those who have been Danish citizens for 26 years.
Støjberg said the move was being made in response to a recent European Court of Human Rights (ECHR) decision that said the 26-year rule discriminates against people who are born outside of Denmark and obtain Danish citizenship later in life.
See also: Danes with foreign spouses to be hit by new restriction
Støjberg said that after the ECHR ruling, the Danish Immigration Service (Udlændingestyrelsen) will now apply the ‘connection requirement’ to everyone. That requirement calls on married couple to prove that they have stronger ties to Denmark than to any other country, something that would adversely affect many Danish citizens who are in relationships with foreign nationals.
The IMR said on Thursday night that it has sent a letter to Støjberg warning her that her course of action is illegal and encouraging her to drop the connection requirement altogether rather than force it upon all families.
“We strongly recommend that you reconsider your decision and choose a remedy that is legal, which is to disregard the connection requirement for those people who are not covered by the 26-year rule,” IMR head Jonas Christoffersen wrote to Støjberg.
Just as the organization Ægteskab uden Grænser (Marriage Without Borders), which represents Danes in international marriages, said after Støjberg made her announcement, IMR contends that the minister's course of action would be illegal because she wants immigration officials to ignore the laws that are on the books.
“It still says in the Danish Aliens Act that those Danes who have had citizenship for 26 years are excempt from the connection requirement,” the group’s senior researcher, Eva Ersbøll, told news agency Ritzau.
Ersbøll added that Støjberg’s plans would be a major blow to Danes living abroad who wish to return home.
“Danish citizens who have been out travelling and have found a spouse and want to come home to Denmark with their family will be hit by this because they might have a stronger connection to the country where they lived,” she said.
Støjberg did not immediately comment on the letter she received from the Institute for Human Rights.