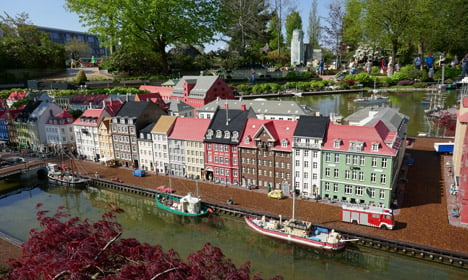 A miniature version of Copenhagen's Nyhavn district at Legoland Billund. Photo: Erik Johansen / NTB scanpix
Nearly 450,000 Norwegians plan to holiday in Denmark this summer, making it the top destination amongst Norway’s travellers, according to a survey from SareBank 1.
Neighbouring Sweden is the third most popular choice for Norwegians while Spain is second.
“We traditionally choose our neighbouring countries, and as always sunny Spain remains a popular vacation destination. These are countries we know well and are convenient for Norwegians to holiday in,” SpareBank 1 consumer economist Magne Gundersen said.
Further down the list of Norwegians’ destinations are Greece, Italy and the UK. Turkey has fallen significantly, with only 77,000 saying that they plan to go there this summer. That is just half the number of a year ago, reflecting concerns following the recent terror attack in Ankara and the ongoing war in Syria.
This is half of last year and is due according to Gundersen uncertainty because of the war in Syria.
On the whole, fewer Norwegians than before are travelling overseas this summer. This is mainly due to economic factors, including a weak Norwegian krone that makes it more expensive to vacation abroad, poor domestic prospects for jobs and a downturn in Norway’s oil industry.
Overall, there are some two million Norwegians over the age of 18 who are planning to add all or part of the summer holidays abroad.
Those staying at home will be stuck with a July that is predicted to be colder than normal in the south but slightly warmer than normal in the northern part of the country, according to the Norwegian Meteorological Institute.
All of those Norwegians heading to Denmark shouldn’t expect a warm getaway, either. Temperatures in Denmark haven’t exceeded 20C for weeks and the Danish Meteorology Institute said wet and cool conditions are expected to continue for at least the next week.