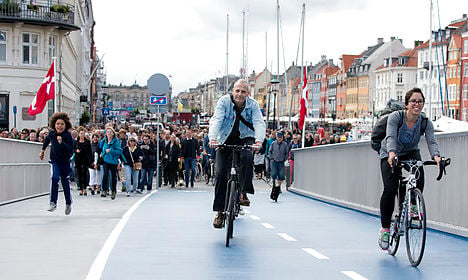 With just hours of advance notice, the scandal-plagued bridge opened on Thursday. Photo: Jens Astrup/Scanpix
The 180-metre long Inderhavnsbro (Inner Harbour Bridge) connecting the Nyhavn and Christianshavn districts was opened for its first journeys, finally ending a long series of delays and setbacks.
The bridge will make commuting easier for the tens of thousands of Copenhageners who choose to hop on a bike to get to work instead of a car, and is the latest in a series of infrastructure upgrades the Danish capital has seen in recent years. The bridge has been in the works for eight years, so Thursday's opening was cause for celebration. Photo: Jens Astrup/Scanpix
The bridge was originally planned to be complete by February 2013, but a number of problems kept pushing the deadline back.
First, the initial financial backer for the project went bankrupt, and it later turned out that the engineers had made a severe calculation error which meant that the two sides of the bridge would not connect properly, forcing the project to start over from scratch.
This was followed by a number of similar engineering mishaps that further delayed the project. In August 2015, it was thought that the bridge had finally been completed only to discover that the system that connects the bridge’s interlocking pieces did not line up correctly.
But on Thursday, much to everyone’s surprise, the bridge finally saw its first cyclists and pedestrians make the journey across the harbour. Copenhagen's deputy mayor Morten Kabell and Claus Bondam of the Danish Cyclists' Federation make the maiden journey across the bridge. Photo: Jens Astrup/Scanpix
Copenhagen’s deputy mayor for technical affairs, Morten Kabell said the bridge’s completion was cause for celebration.
“It has been chaotic, confusing and ugly. But now it’s done and I think that all Copenhageners have looked forward to this day, when we can finally put our bridge in use,” Kabell told Politiken. The bridge was jam-packed on its opening evening. Photo: Jens Astrup/Scanpix
The Inner Harbour Bridge has already been given two nicknames among Copenhageners. It is called ‘The Kissing Bridge’ (Kyssebroen) by some due to the way the flowing bridge looks like two tongues meeting, while its proximity to Christiania has also earned it a slightly less flattering name: Den Skæve Hashbro, a double entendre that means both 'The Crooked Hash Bridge' and 'The Stoned Hash Bridge'. In addition to providing a major short-cut, the bridge also has lookout spots. Photo: Jens Astrup/Scanpix
Hundreds of residents and tourists were on hand when the bridge was opened for traffic at 6pm on Thursday. The city will hold an official opening ceremony on August 19th.
The Inner Harbour Bridge joins the much-beloved Cykelslangen, Danish-Icelandic artist Olafur Eliasson’s futuristic-looking Cirkelbroen (the Circle Bridge) and the recently-completed Harbour Circle path as the newest improvements on what is already the world’s best city for cyclists. The bridge can open to let larger passing ships through. Photo: Jens Astrup/Scanpix