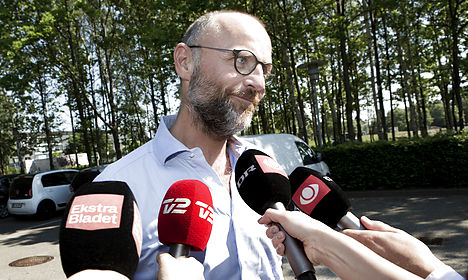 A prominent figure in the case is former Se og Hør editor Henrik Qvortup. Photo: Linda Kastrup/Scanpix
In April 2014 former journalist Ken B. Rasmussen published a purportedly fictional book detailing how gossip magazine Se og Hør used credit card information to write stories about members of the royal family.
The magazine's rivals had been baffled by a series of celebrity scoops it had run including one about Danish Prince Joachim's 2008 honeymoon in Canada, which had been kept secret.
After a police probe, prosecutors filed charges against eight people as well as magazine owner Aller Media, prosecutor Morten Frederiksen said in a statement.
The hacker suspected of leaking the information initially worked at a firm which is now part of a card payment company, before the group outsourced his job, according to police.
All eight, including three former editors of the magazine, are accused of breaching Danish laws on cybercrime and confidential business information, and face up to six years and four years behind bars, respectively.
The Se og Hør case has been widely characterized as the biggest media scandal in Danish history, particularly given the prominent status of one of the defendants, former Se og Hør editor Henrik Qvortup.