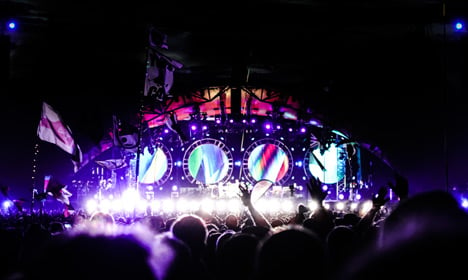 After four days of concerts, it was tough to pick the best. Photo: Bobby Anwar
Befitting the diversity of the line-up, there are precious few overlaps in our three writers' picks for the best concerts at this year's Roskilde Festival. Performances from all six stages and on all four of the festival's main musical days made the cut.
From legendary acts to Colombian experimental rock and UK grime – and just about everything in between – here are our selections for the best performances.
Justin Cremer's top five picks
1. Neil Young + Promise of the Real (Orange, Friday) Neil Young played a three-hour set on Orange. Photo: Nils Meilvang/Scanpix
From the opening keys of 'After the Gold Rush' through the 30-minute extended jam encore performance of 'Love and Only Love', Neil Young put on a commanding, thunderous performance. Mixing old favourites like 'Alabama', 'Words' and 'Unknown Legend' with newer tracks like 'Mother Earth', Young and his excellent backing band Promise of the Real put on a show that was quite possibly the best I've witnessed on the legendary Orange stage.
2. Kvelertak (Avalon, Thursday) Kvelertak played a chaotic, cathartic late night set at Avalon. Photo: Justin Cremer
There were an estimated 7,000 Norwegians at this year's festival and at times during this Stavanger band's wild and raucous late night set, it felt like I was surrounded by all of them. This was without a doubt the highest energy interaction between band and audience that I had the pleasure of being a part of.
3. Savages (Avalon, Thursday) A terrible photo of a great show by Savages. Photo: Justin Cremer
When I saw Savages play the Pavillion stage in 2013, it was one of that year's most pleasant surprises. Three years later and on the larger Avalon stage, the London-based quartet blew me away again with their mix of attitude, sexiness and intensity.
4. Sleep (Avalon, Wednesday)
The midnight set from doom pioneers Sleep was near the top of my list going into Roskilde, and it certainly did not disappoint. This was an absolutely hypnotizing set that provided the perfect ending to the festival's opening night.
5. Gojira (Arena, Saturday) Gojira kept the festival's final day going strong. Photo: Justin Cremer
I had heard good things about this French prog/technical metal band's live performances for years and now I know why. Even though the band apologized several times for being a bit “rusty”, their Saturday evening set was a blistering display of tight musicianship and crunching grooves. The band might not have felt like they had delivered their best, but for me Gojira lived up to the hype.
Chris Manion's top five picks:
1. Sleep (Avalon, Wednesday) Sleep played behind a wall of fog and lights at Apollo. Photo: Justin Cremer
I sceptically joined a group to see the band Sleep with no prior knowledge of them or ‘stoner doom metal'. As soon as we were about 50 metres from the show, I could sense perfect harmony between the music and the audience. It was this symbiotic relationship that some artists simply failed to capture in the same enigmatic style. The music was expressing a shared feeling, a collectiveness, and that is what Roskilde Festival is essentially about, being together for the love of music.
2. Neil Young + Promise of the Real (Orange, Friday) One legend meets another: Neil Young on Orange. Photo: Justin Cremer
The 70-year-old Canadian legend delivered a breathtakingly energetic performance. The show progressed from heartfelt renderings of classics such as ‘Heart of Gold’ to a full throttle rock’n’roll experience like no other.
3. MØ (Orange, Saturday) Danish superstar MØ on Orange. Photo: Sara Gangsted/Scanpix
The Danish international star came to the Orange stage on the final evening of Roskilde 2016. There were many festival-goers looking defeated and deflated, a tough crowd to bring alive. As soon as MØ came to the stage, it all changed. She brought a passion and energy that could not be topped by many other artists in the world.
4. Courtney Barnett (Avalon, Thursday) Courtney Barnett at Avalon. Photo: Ólafur Steinar Gestsson/Scanpix
A first-time Roskilde Festival experience for the young Australian singer-songwriter and she did not disappoint. She gave festival-goers a powerfully sincere performance. Many times throughout the show, you could see that this was still a 28-year-old playing songs that openly confess her deepest fears and regrets. That humility gave the performance a beautifully personal touch.
5. Mac DeMarco (Arena, Friday) Mac DeMarco at Arena. Photo: Ólafur Steinar Gestsson/Scanpix
The cheeky Canadian up-and-coming star strutted on the stage with unabashed confidence, and then looked at the audience like a naughty schoolboy and gave his famous gap toothed smile. From then on, it was a fun, energetic and charismatic performance.
Allan Mutuku-Kortbæk's top five picks
1. House of Pain (Orange, Thursday) Old school rappers House of Pain showed that they still have the skills. Photo: Mathias Løvgreen Bojesen/Scanpix
The guys that brought us the legendary ’Jump Around’ tune rocked the Orange stage to its core during their Thursday afternoon performance. Who would have thought that a hip-hop mainstay such as this would play Johnny Cash’s ’Walk The Line’ in their set?  Schoolboy Q and Young Thug should take notes from these OGs.
2. Tame Impala (Arena, Friday) Tame Impala put on one hell of a party on Friday night. Photo: Mathias Løvgreen Bojesen/Scanpix
Australians Tame Impala are a class act and have grown in presence and stature since their previous appearance at Roskilde a few years ago. Backing their performance with an impeccable light show and a ton of confetti, they were simply insurmountable on the Arena stage.
3. Los Pirañas (Gloria, Saturday) Los Pirañas gave a commanding performance on the intimate Gloria stage. Photo: Allan Mutuku-Kortbæk
Colombia's Los Pirañas churned out an endearing stream of psychedelic rock fused with South American influences that blew the roof off the intimate Gloria stage. Hats off to the stage crew for outfitting the stage with an epic light show to match an assured performance.
4. Tenacious D (Orange, Thursday) Tenacious D gave a weird but wonderful post-midnight show on Orange. Photo: Nils Meilvang/Scanpix
Honestly, I’m not a Jack Black fan and even after his momentous performance at Orange, I still have my doubts about the man's sanity. Credit is due to him, however, for providing a fun and at times mesmerising show amidst the rain. Where others would have stumbled, Tenacious D were sure-footed, weird and even wonderful.
5. Elf Kid (Apollo, Saturday) Elf Kid's early afternoon set helped wake up the Apollo crowd. Photo: Allan Mutuku-Kortbæk
Grime’s renaissance was reflected in Roskilde’s bookings this year. Of those on the billing, South London’s Elf Kid was, for me, the most impressive of the lot. Backed by his DJ, the kid spat out one lyric after another before getting bare-chested in the early Saturday afternoon chill, encouraging everyone to banish their hangovers to mere memory.
Go here for more from this year's Roskilde Festival.