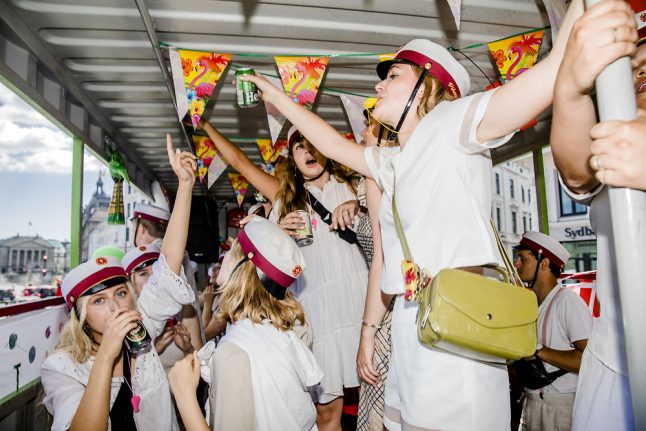 Thousands of young students have taken to the streets of Denmark wearing their caps. Here on studenterkørsel in Copenhagen. Photo: Nikolai Linares / Ritzau Scanpix

To the untrained eye, there seems to be something unusual about Denmark’s youth at this time of year. In towns of all sizes all over the country, young people can be spotted riding around in open-backed trucks blaring horns and music, jumping into water or drinking beers in cafés or parks.

They are Denmark’s latest class of high school graduates or studenter, and it’s easy to spot who they are – they’re the ones wearing white caps.

“It’s an indescribably fantastic feeling to be wearing the cap,” says Josefine Paaske, 19, who passed her final exams at the Aarhus Katedralskole gymnasium last week.

“It feels like three years of hard toil have finally been rewarded.”

The students spend up to two weeks celebrating their high school certificates, going to parties and taking the studenterkørsel: a trip around town on a colourfully decorated truck, often emblazoned with innuendo-themed wordplays. The trucks stop at the homes of each class member, where parents provide food and drinks. Paaske describes her studenterkørsel as a “14 hour-long party”.

All this is done wearing an essential piece of uniform: the studenterhue or graduation cap. The studenterkørsel adds a bit of colour to the Danish traffic for a few weeks in June. Photo: Henning Bagger / Ritzau Scanpix

A look inside the lining of the cap worn by 18 year-old Kim Jensen reveals, along with well-wishes inscribed in biro by friends and classmates, a large number 10 with a circle around it.

“We write the grade from our final exam on the inside of our caps,” says Jensen, who attended the Tradium HTX college in Randers.

But why? What’s the significance of the white caps worn with such pride by Paaske, Jensen and thousands of their peers? And what do the different colour ribbons mean?

The original cap, which was black with a white rope band, emerged in the mid-19th century, before male gymnasium (high school or upper secondary school) students began wearing the white silk caps with burgundy-coloured ribbons from the 1880s onwards. These caps are the most famous style to this day and are closely connected with the traditional gymnasium schools.

Female students began wearing caps during the 1930s. At that time, the number of young Danes graduating from gymnasium was relatively low – the cap was seen as a status symbol and the young studenter would continue to wear the cap for the entire summer, prior to commencing their university studies. To this day, it is not just during those heady weeks in June that caps can be spotted around Denmark, as proud graduates keep them on for much of the summer holidays.

The variety of cap styles as well as prevalence of the caps themselves have increased over the decades. In the 1970s, the classical studentereksamen (high school graduation or GCSE) was joined by trade (royal blue band) and technical (marine blue band) certificates along with a two-year version of the traditional gymnasium education (sky blue band) all with their own style of cap.

Even international school students have their own style of cap, which has a ribbon decorated with national flags. Once the caps are on – and wearing them before the final exam is considered unlucky – they are kept on.

Not without a few adaptations, though. Dares, challenges and party-related mishaps are all recorded on the inside of the caps during the course of the days of festivities. Jumping into the sea wearing nothing but the cap can earn the student a wave-shaped cut in its inner lining, for example. A cut into the peak might mean that the wearer threw up during a post-exam party. In Aarhus, students are often seen jumping into a small fountain near the city hall – a tradition that Paaske says she also took part in.

The different rules are written into the lining of the caps – which are unique for every Gymnasium – underneath the forehead sweat band.

“I have this because I stayed up partying until sunrise,” says Paaske, taking off her cap to show a triangle cut into the lining. For Jensen, the same symbol in his cap means that he managed to get through 24 beers during the course of a graduation party.

The pair, who seem remarkably fresh given their obvious commitment to studenter hedonism, told The Local that they plan to take a year off for work and travel before starting the civil engineering programme at Aalborg University.

Traditions for marking hats with reminders of holiday revelry may vary according to time and location, but one appears to be constant.

Messages of good luck and best wishes are written by the students to each other on the linings of the caps, so that they may remember each other when they look at the caps – which can be found on bookcases or shelves in many a Danish home – in subsequent years.

But some of the traditions relating to the student caps may be starting to modernise.

“I think more people are using social media to tell friends and family. It’s a way to show pride over things,” says Jensen. Paaske is quick to agree.