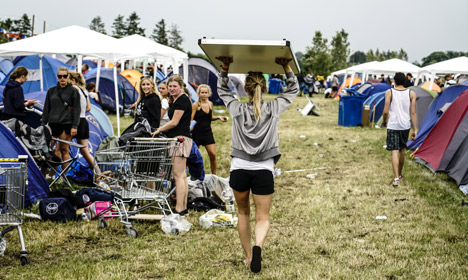 The camping grounds provide a good mix of planned as well and spontaneous parties. Photo: Bobby Anwar
In Denmark, Roskilde Festival is seen as both a rite of passage and an annual monumental occasion that attracts young and old in great numbers year after year. But it’s far from just music that draws the crowds.
Camping at Roskilde is one the festival’s central elements – revered, loved, hated and embraced by countless festival-goers. By Monday, Roskilde had already drawn over 50,000 eager campers to its grounds, with a further 70,000 attendees expected over the remaining days, as things kicks into full gear from Wednesday and onwards.
Some of the hardcore campers waited in line for the gates to open since as early as last Tuesday, armed to the teeth with stockpiles of alcohol, camping gear and festival paraphernalia. For early birds of this sort, getting a good camping spot is every bit as important as the overall concert experience. In fact, some of Roskilde’s most memorial parties take place during the warm-up days, which provide a good mix of planned as well and spontaneous parties.
The camp grounds are truly a cocktail of differing emotions. One can experience everything from rowdy teen neighbours with thunderous sound systems that belch out music all night long, to the well-known whiff of portable festival toilets. Yet camps are also a base for all of the festivals guests – sites of endless revelry, a few hours of sleep, masses of mackerel cans and unforgettable experiences.
What is it like to camp at Roskilde?
The Local caught up with some of the festival guests and took a walk around the camping areas to see what it is like to camp at Roskilde festival 2016. Photo: Allan Mutuku-Kortbæk
British/Kenyan student, Harry Simpson, Roskilde West,
“This is my fourth Roskilde Festival and I’m really looking forward to it. I’m camping in the workers’ area for a change and it’s very chilled there!” Photo: Allan Mutuku-Kortbæk
French rapper and student, Robin Houselstein, Roskilde East.
“It’s my first time here and the scale of it all is mind-blowing. I’m camping with a bunch of friends from Roskilde University in camping area P and we’re having a blast!” Click map for larger version
Popular camping areas at Roskilde
Camping areas at Roskilde differ in size, scale and nature, depending on where on the map one camps. Some of the most popular areas include:
Roskilde West: Camping Areas C and E
Home to the skate park, basketball courts, beach volleyball courts and beach soccer pitches, West contains some of the largest portable sound systems at the festival. It also contains the warm up music scenes Rising and Street City so one’s eardrums are on a 24-hour shift.
In an effort to shine West up this year, Roskilde Festival has created the Clean Out Loud initiative, which gave residents the chance to book an early camping spot in return for a commitment to leaving the area clean at the end of the festival. The goal this year, according to Roskilde Festival is “to leave the entire section E area clean.”
Mid-Roskilde: Camping Areas G, H and L
Located close to the entrance of the main festival area, this camping section tends to be rather uninspiring and is usually occupied by some of the festival’s younger contingent. Camping areas here are a stone-throw away from the ‘Countdown City’ stage.
Roskilde East:  Camping Areas J, K and P
Roskilde East is also popular amongst younger festival-goers and on sunny days, it is the place to be if one fancies a dip in the swimming lake or a relaxing nap along its beach. Located around a small lake where one can fish, J is a silent area where sound systems are prohibited and an emphasis is placed on keeping things clean.