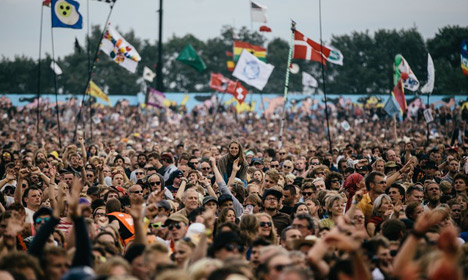 It's that time again! Roskilde begins on Saturday. Photo: Tobias Nicolai/Roskilde Festival
As some 130,000 fans prepare to descend on the festival grounds for eight days of music and merry mayhem, we take a look at some of the things we’ll be keep a close eye on during this year’s festival.
1. What will the weather be like? Look at those blue skies! Will we get them this year as well? Photo: Per Lange
Let’s start with the obvious: the perennial weather question that everyone asks themselves ahead of the festival. Festival-goers are particularly keen to hear the forecast for this year’s festival, given as Roskilde comes after a week that has provided both glorious sunshine and ravaging thunderstorms. Which of those will continue through next week? Well, at the time of writing the Danish Meteorology Institute (DMI) was predicting a cloudy albeit mostly dry week ahead, with the exception of Wednesday. However, as always, the unpredictable Danish weather will be certainly a force to be reckoned with.
2. Will the music lineup please or disappoint? Wiz Khalifa is one of several big hip-hop names at this year's festival. PR photo
Roskilde sold out in good time this year, indicating early signs of impending success. Its music lineup this year features quite a few major hip-hop acts, such as Wiz Khalifa, Action Bronson, House of Pain and Vince Staples. This is a lineup that is inclined more towards an urban sensibility than it is anchored in the rock and metal heritage that has come to define Roskilde over the years.
Still though, there is also plenty on offer for the headbangers, from heavyweights Slayer to Nordic upstarts Kvelertak, and there are acts like Neil Young that should be able to assemble the diverse masses in front of Orange Stage. Will this year's lineup pay dividends for the organisers?
3. Will the Red Hot Chili Peppers redeem themselves? RHCP need to redeem themselves in the eyes of Roskilde fans. PR photo
The last time the Peppers graced the Orange Stage, they bombed abysmally. Their 2007 performance was so roundly slammed by audience members and critics alike, that it was all anyone talked about when they were added to this year’s bill. Will they be able to silence their critics?
4. How will the political message behind the Orange Stage’s opening act go down? The Syrian National Orchestra and Damon Albarn. Photo: Mark Allen
The festival’s legendary Orange Stage will be opened this year by the Orchestra of Syrian Musicians, a clear political statement by the organizers given the hot-button issue of how Denmark has reacted to the Syrian refugee crisis. The musicians were scattered across the world as the Syrian Civil War erupted in 2011, but now the 90-strong orchestra will be reuniting for one of their first ever concerts together since fleeing the country. The orchestra, conducted by Issam Rafea, will be joined by none other than Damon Albarn of the Gorillaz and Blur fame, along with other special guests. The show could be one of the most breath taking performances of the entire festival (especially considering that Albarn had to literally carried off the stage the last time he visited Roskilde).
5. How will Roskilde fair against growing competition? NorthSide, Tinderbox and Copenhell have all crowded in on Roskilde's territory. Photo: Michael Barrettt
Denmark’s music festival scene has really come alive in the last few years, and it seems like more and more huge international stars are gracing stages across the country. This year has already seen the one and only Iggy Pop headline Aarhus’ NorthSide, the multi-award-winning spectacle that is Rammstein come to Funen’s Tinderbox and the British music legends Black Sabbath including Copenhell on their farewell tour.
Roskilde has, of course, still brought some huge names to Denmark once again this year, but will the growing reputations of NorthSide, Tinderbox and Copenhell challenge the dominance of Roskilde as Denmark’s biggest and best music festival? Or will the increase in competition see Roskilde raise the bar to an unprecedented level this year? We are waiting with bated breathes, but only time will tell!
6. Will our Roskilde virgin survive? The Local's former intern Chris Manion will be attending his first music festival ever.
The Local has been covering the festival since we launched in Denmark in 2014, and some of our team have been coming since long before that. But this year, we will also have a ‘Roskilde virgin’ with us. Former intern Chris Manion has not only never been to Roskilde before, he’s never been to a music festival.
“Since coming to Denmark two years ago, my 24-year-old festival virginity seems to be a thing of sheer unbelief,” he said. “Upon informing the inquisitive Dane of my disinterest in music festivals I summarily receive a noise akin to  a dying sea otter, followed by a fantastically enthusiastic ‘ROSKILDE IS THE BEST EXPERIENCE YOU WILL EVER HAVE!’. So this year I’m going to do it, take the plunge, get down and dirty, and see if this Roskilde festival is all it’s cracked up to be.
Don’t worry, us veterans will look out for him.
7. How much of a mess will be left behind?
Another perennial Roskilde query. Once the maddening crowds have left and the camping grounds resemble an apocalyptic dystopia, the question of who will clean up the mess always arises. Roskilde Festival incurs significant expenses each year in mopping up after its hedonistic guests, who leave behind everything from fully functional tents to rich stocks of tinned food. Much of what is abandoned is donated to worthy causes.
8. Will Roskilde fix its 'collector problem'?
Continuing on the same tangent, Roskilde’s guests drink over one million litres of beer every year, resulting in millions of beer cans spread around the festival grounds. Denmark’s can remuneration system ensures that many of these cans are recycled, thanks to an influx of hundreds of can collectors primarily from Africa and the Roma community at events such as Roskilde. Those collectors help recycle cans and bottles while earning some money for themselves, but their interaction with festival guests isn't always as happy as in the video above.
The collectors become an underclass that works in poor conditions, often marred by racist overtones and abusive reactions from merrymakers. They have also faced notoriously long lines in recent years to collect their deposits but organizers have worked hard to improve conditions for those who clean up after the rest of us.
The Roskilde Festival begins on Saturday, June 25th and runs through Saturday, July 2nd. The first four days serve as “warm-up” and feature a number of up-and-coming Nordic acts and scores of activities on the campgrounds. The main music line-up begins on Wednesday, June 29th.