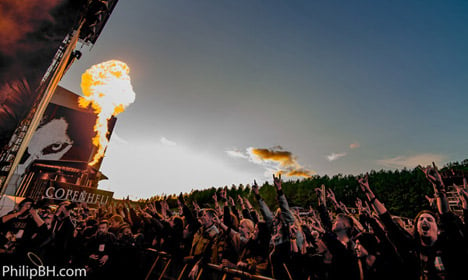 Get your metal horns ready – Copenhell kicks off on Thursday! Photo: Philip B. Hansen/PhilipBH.com
Copenhell is fast becoming a Copenhagen institution with seven years of constant expansion in both its line-up and size. With this year’s edition, which begins on Thursday, the heavy metal festival has reached a new milestone. For the first time ever, all tickets to the gates of hell have been sold in advance.
Drawing the record crowd to this festival situation on an industrial shipyard is the ultimate headliner for metal fans in the form of the legendary Black Sabbath, fronted by the Prince Of Darkness himself, Ozzy Osbourne.
See photos from Copenhell 2015 here
Despite being well past middle age, the old crooner has proven time and again that he can withstand his years of drug abuse and still manage to make a worthwhile performance on stage.
Yours truly witnessed Sabbath perform to critical acclaim back in 2005 at Roskilde Festival. Let’s hope the quartet gives a hell of a performance on Saturday, as it will be the groundbreaking band’s last ever performance in Denmark.
The mighty Sabbath is far from the only established metal and hard rock names that will grace Copenhell. Another classic headliner this year is the German band Scorpions, best known for their hit number 'Rock You Like A Hurricane'. Megadeth will also be performing with Dave Mustaine bringing his shredding skills to the stage and hopefully playing some classic material instead of more recent and largely underwhelming work.
See also: What I learned from my first time at NorthSide
Every year, Copenhell books an odd-one-out punk headliner and this year it is none other than the legendary Dropkick Murphys who will surely provide the obligatory mosh party with their irish-tinged folk punk, jampacked with melodious bagpipes and flutes.
Ex- Mercyful Fate vocalist King Diamond will also returns to his home base in Copenhagen to perform a solo gig promised to be the most theatrical horror show to date from the revered falsetto champion. Another master of disguise comes in form of Alice Cooper, who with 40 years on the road has plenty of experience to ensure an entertaining set filled with melodious classics such as ‘Posion’ and ‘School’s Out’.
See photos from Copenhell 2015 here
On the blues rock front, Copenhell has booked one of the most exciting acts in form of Rival Sons, a band that has been compared to the likes of Zeppelin and The Doors. Immortal vocalist Abbath will supply the blackest of black in Norwegian metal this year, whilst Clawfinger will ensure some 90’s rap-metal for the sake of nostalgia.
While this year’s line up is filled with classic acts from a bygone era, there also a number of upcoming and established newer acts such as Beartooth, Monument, August Burns Red and Tremonti.
But Copenhell is much more than just an array of metal concerts. The festival area is tailored directly to satisfy the carnal needs of metalheads. As a metal sanctuary, the festival area has a themed biergarten, a Viking land with pork roasted on a spit, a so-called ‘Destruction Land’ where you can smash the hell out of cars and stereos, and of course a massive merchandise area for the shoppers.
Copenhell will open its gates on the June 23rd and run for three full days on the island of Amager, in Refshaleøen. Get ready for a lot of lager-guzzling and intense moshing in Denmark’s favourite metal paradise!
Click on the photo below to relive the 2015 edition of Copenhell.