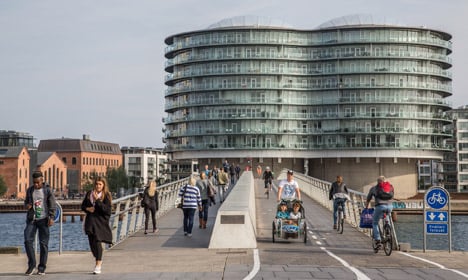 The new route ties together the numerous improvements for cyclists and pedestrians along the harbour in recent years. Photo: Tony Webster/Flickr
It’s no secret that the world is fascinated by the bicycling culture in Denmark. With Copenhagen as the the absolute best city for cyclists anywhere and an estimated 55 percent of residents biking to their work or education, the prominence of bikes has long been one of the city's trademarks.
Now the recent completion of the Harbour Circle (Havneringen), a 13km route that gives cyclists an unbroken route around the inner harbour, has once again made Copenhagen the envy of cyclists everywhere.
See also: Danish bike culture even cooler than you thought
The completion of the new route, which added new stretches to previously-existing bridges and paths to offer a full loop, quickly spread around the world.
“The news of the Harbour Circle – the new cycling and pedestrian route along the entire harbour – has spread a long way throughout the world. All the way to China, in fact. We think that’s a bit crazy,” the City of Copenhagen wrote on Facebook.
See also: Copenhagen rides to the top of bicycling world
According to the city, 15 TV stations in countries including the US, China, Australia and France used The Harbour Circle’s video news release. It’s estimated that a combined 50 million people viewed the various international reports.
See a wrap-up of the international coverage here, followed by a video showing many of the cultural offerings that can be found along the Harbour Circle.