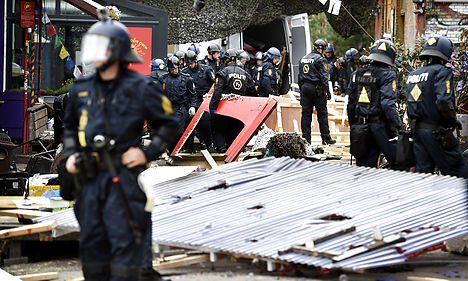 Using saws and hammers, officers tore down 37 cannabis stalls and arrested 18 people. Five kilos of hash, four kilos of marijuana and over 1,000 pre-rolled joints were confiscated. Police also seized 42,000 kroner and found a knife, illegal pepper spray and a large quantity of fireworks.

A Copenhagen Police press release said that officers were hit by eggs and rocks while they tore down the stalls.

“Today's action shows that the cannabis dealers will go to great measures to protect their business, which was demonstrated by the find of smoke bombs, pepper spray and a knife in the cannabis booth,” Dannie Rise of Task Force Pusherstreet said. Police said the action was carried out to create “a peaceful and safe Christiania for everyone”.

According to reports, cannabis sales resumed within minutes of police leaving Pusher Street, leading many to wonder what actual purpose the action served.

A spokeswoman for Christiania residents speaking with broadcaster DR called Friday's police action “a frightening amount of money wasted from the state coffers because cannabis will be sold again as soon as the officers are gone”.

Five of those arrested were scheduled to make a preliminary court appearance on Saturday, with police pushing for them to be held in detention.