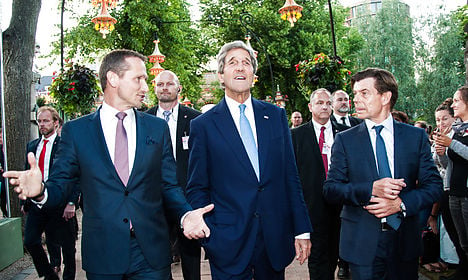 US Secretary of State John Kerry strolled through Tivoli with Foreign Minister Kristian Jensen and the amusement park's CEO Lars Liebst. Photo: Martin Sylvest/Scanpix
Kerry met with both Prime Minister Lars Løkke Rasmussen and Foreign Minister Kristian Jensen to discuss cooperation between the US and Denmark.
During his visit, Kerry thanked the small Nordic nation for its role in such global issues as counter-terrorism, trade and climate change.
“Denmark is a major contributor to and leader in the efforts to stand up for democracy, to support Ukraine and its sovereignty, to be part of an effort that is fighting back against a modern form of nihilism and fascism that presents itself in Daesh, or ISIL, as people call it,” Kerry said.
“It takes time, but I am convinced by what we are achieving with the help of Denmark and others in Iraq and in Syria that we are going to be successful over time. And we just have to be steady and be confident and keep moving forward,” he added.
The secretary of state visited one of Copenhagen’s most popular tourist attractions, the Tivoli Gardens amusement park.
“I’m really happy to be here – happy to be in Denmark, and particularly happy to be back in Tivoli Gardens, which I last visited when I was a young boy here with my family on my way driving up to Oslo, where my dad was stationed. So I remember the great rides, and I had a lot of fun, and I know this: I didn’t want to go to Oslo, I wanted to stay here and have fun,” he said.
Kerry left for Greenland on Friday morning, where the focus will be on climate change.
“One of the greatest challenges of our times besides the fight against extremism is to deal with the enormous battle of climate change. That’s why I’m going to Greenland tomorrow, because if we were to lose the ice sheet of Greenland, we would see a sea level rise of some 22 feet over the course of this century,” he said.