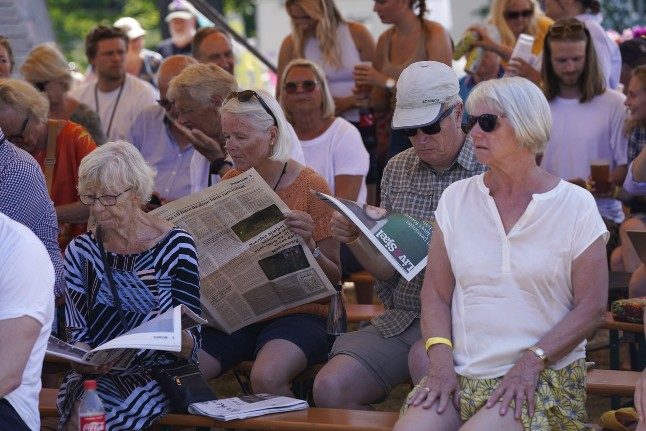 People wait for Mette Frederiksen to give a speech on Friday. Photo: Ida Marie Odgaard/Ritzau Scanpix

The People’s Meeting (Folkemødet) is an annual four-day festival for political junkies where, as the name implies, Danes get the opportunity to meet their politicians face-to-face. The basic concept is to strengthen the democratic dialogue between residents and politicians by serving as a platform for debate panels, info sessions and speeches.

2. Where did the idea come from?

The Swedes, actually. The inspiration came from the Swedish Almedalen political week, held in Gotland every year since 1968. A small delegation of Danish politicians who attended the festival in 2010 were so impressed with the concept that they decided to bring it to Denmark.

3. Where and when is it being held, and what coronavirus restrictions will there be?

Folkemødet will run from June 17th to 20th and is held in Allinge on Bornholm, a sleepy town on an equally sleepy island on the eastern periphery of Denmark.

In 2021, the festival is being held a corona-adapted way, split between physical open-air meetings and digital ones.

Meetings are held in tents without sides, or in the case of the main stage, in the open air. Spectators should only face towards the stage, and there should be a gap of at least one metre, or one empty chair.

The meeting is being divided into five sections, with a maximum of 500 visitors in each, and visitors need to book tickets to attend each event, and will need a valid coronapas to enter.

You can also follow the meetings on the main stage, and the other four stages, using the Følkemødet website.

This year there will only be about 15,000 visitors, a fraction of the up to 65,000 guests, journalists and politicians who invade the town of 1,600 people in a normal year.

You should imagine Copenhagen’s Distortion festival but for an older demographic, or the Roskilde Festival without the music to get a sense of what it can be like: more politics and elevated discussions, less loud music and public urination.

4. Why is it being held on Bornholm?

In recent years there’s been a lot of debate about what is referred to as ‘Udkantsdanmark’, the parts of the country far from big cities like Copenhagen and Aarhus. People living in peripheral regions feel politically marginalized and Bornholm is pretty much as peripheral as it gets, so there’s a symbolic value in the politicians coming there to get in touch with the common Dane.

5. Why has it become so popular?
It’s a unique event in that it’s essentially the one time of year where practically everyone who’s important in politics is gathered in the same place at the same time. This allows a large variety of events, debates, and networking to happen in a transparent fashion that includes the voting public. Everyone wins; the politicians, interest groups and other organizations are given a platform that helps them reach thousands of people, politics is made more accessible to the people, and a little part of peripheral Denmark suddenly gets to have its moment in the sun. There will be no shortage of talks and events over the course of the festival. Photo: Søren Svendsen
6. Who will be there?
Pretty much everybody who is anybody in Danish politics will attend. Denmark’s Prime Minister Mette Frederiksen kicked off proceedings on Thursday and will give her big speech on Friday.
She was followed by Sikandar Siddique from the Free Green party, Alex Vanopslagh from the Liberal Alliance and Sofie Carsten Nielsen, leader of the Radical Alliance.
On Friday, it’s time for the Franciska Rosenkilde, leader of The Alternative, Mette Frederiksen’s big speech, the main speech of Jakob Ellemann-Jensen, leader of the Liberal Party, and the big speech from Pia Olsen-Dyhr, leader of the Socialist Left Party.
On Saturday, it’s time for the other right-ring parties, with the leaders of the Conservative Party, Christian Democrats, Danish People’s Party, and New Right parties all taking to the main stage.
In addition to the political parties, there will be scores upon scores of other organizations on hand to either hold their own events or just glad-hand. Seriously, just see for yourself how long it takes to scroll to the bottom of the list of participants.
7. Any special guests this year?
The big guest this year is Sviatlana Tsikhanouskaya, the leader of the Belarussian opposition, who has been invited by the Danish Institute for Parties and Democracy.
Controversial guests in previous years have included the Dutch politician Geert Wilders, who in 2015 delivered a speech critical of Islam. The nationalist Danes’ Party (Danskernes Parti), also brought along several of their far-right colleagues from around Europe including the Greek neo-fascist party Golden Dawn, for a debate on nationalism.

8. What makes the festival so great?

One of the wonderful things about Folkemødet is that it really does have a festival feel. Sure, there will be a lot of serious discussions about politics, the green transition, citizenship laws etc.

But there will also be entertainment in the form of quizzes, performances, film screenings and concerts.

On Thursday, they played the Denmark-Belgium EURO2020 match on the big screen, and there was a performance from the Mogensen/Helveg Band

On Friday night, the singer-songwriter Annika Aakjær will give a performance,

9. What else will be going on?

In a normal year, every conceivable organisation will have tents and/or booths set up where you can walk up and engage them in friendly debate or just scope the tents for the best freebies and pamphlets.

There is also normally representation from the media, businesses, ministries, non-government organizations, and lobbying groups, all of whom put on their own events, panel discussions and debates to compete for attendees’ attention.

That has all been radically scaled back this year.

10.  Is there anything else that’s special about Bornholm besides the People’s Meeting?

One of the ulterior motives of the Meeting is of course to shine the spotlight on Bornholm, which is rapidly transforming into a popular tourist destination for Danes and Germans in particular. It’s a beautiful island with a lot of nice beaches, nature, and quaint villages, although all of that may be a bit hard to see owing to the sheer volume of politicians and brochure-clutching political junkies.

Note to readers: A previous version of this article was published on June 10th, 2016