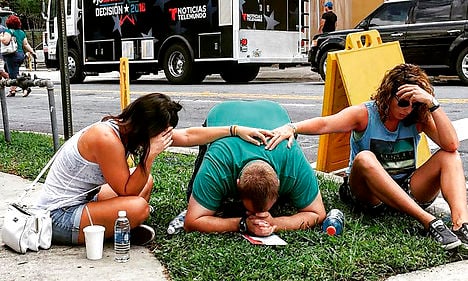 People mourn for victims of the mass shooting near the Pulse nightclub in Orlando, Florida, on Sunday. Photo: AFP/INSTAGRAM/the_pixel_trappa/Scanpix
“We have been witness to a vicious attack on the right to be who you are. The right to love the person you love,” the PM said in a statement released on Sunday night.
“Far too many innocent people lost their lives in Orlando because open-mindedness and tolerance were met with hatred. My deepest condolences go to the victims, their families and all of the American people,” Rasmussen said.
The Danish PM said that the attack on the gay nightclub Pulse was “not only meaningless, it is also futile.
“Rather than dividing us, it will unite us. We will protect the values our society is built upon: the freedom to live the life you choose,” Rasmussen said. “We Danes stand should to shoulder with Americans in their grief.”
The PM also expressed his condolences via Twitter:

Horrified by attack in #Orlando. Let's unite in the fight for
equal rights. My thoughts are with the victims and all affected.

The Sunday massacre in Orlando was the deadliest mass shooting in recent US history. The American-born gunman pledged allegiance to the terrorist group Isis shortly before the attack.
In February 2015, a Danish-born man expressed his support for Isis before killing two people in twin shootings in Copenhagen. Four men charged with helping the gunman are currently on trial.