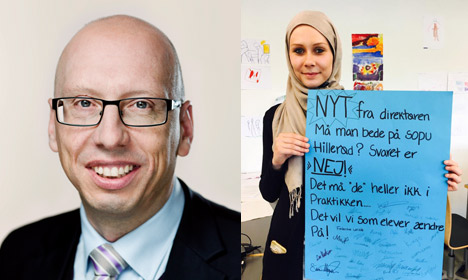 Ahrendtsen said that Muslim converts like the one who wanted to pray at a Hillerød school "are the worst". Photos: Folketinget, Mia Victoria Lunderød Hansen/Facebook
Alex Ahrendtsen of the anti-immigration Danish People’s Party (DF) will formally be reported to police for racism on Monday over remarks he made about Muslims on Friday night.
Speaking to TV2, Ahrendtsen gave his full support to a suburban Copenhagen school that has told its Muslim students not to pray and accused Muslim converts of “boasting” about their faith.
See also: Danish school tells Muslims they can't pray
“There is only one thing worse than devout Muslims and that is converts,” Ahrendtsen said.
“They want to absolutely show how good they are as Muslims, and that should happen in full public view and as often as possible. On the floor, everywhere,” he added. “They want to boast, they want to flaunt their new-found Muslim faith.”
Ahrendtsen also directed his comments toward devout Muslims in general.
“Devout Muslims damage democracy and therefore we need to crack down on them. And converts are particularly extreme – in fact, they are the worst,” the DFer said.
The organisation AnmeldHad (Report Hate) said over the weekend that it would file a formal complaint against Ahrendtsen on Monday, contending that his remarks violate article 266b of Denmark's penal code, best known as “the racism paragraph”.
“We were contacted by numerous people who were offended by the remarks Alex Ahrendtsen made on Friday night,” the organization’s chairman, Qasam Ijaz, told TV2.
“They were deeply offensive comments and when a member of parliament speaks in that way, it become acceptable for normal Danes to express themselves in the same way,” Ijaz added.
Ahrendtsen said he wasn’t particularly worried about the complaint leading to a criminal charge.
“People use the [racism] paragraph as a tool to shut the mouths of politicians and it is always rejected by the police,” he told TV2 on Sunday.
He stood by his comments and said “it is a fact” that Muslim converts “are often more extreme”.
“They want to show that they belong to the religion and have adopted all of the religious rules,” he said.
Ahrendtsen also clarified that when he talked about “devout Muslims” he meant those who “oppose Danish society and encourage deception, fraud and violence against women”.
“I’m not thinking about all Muslims in Denmark, because the majority of Muslims try to find a balance between religion and society,” he said.
Ahrendtsen is no stranger to controversial statements. In August 2015, he lashed out against what he called “pizza Danish”,  referring to the sort of Danish that is often spoken at pizzerias, where words and phrases from Middle Eastern languages are often utilized due to the ethnic backgrounds of the staff.
Two months before that, he proposed a tax on the use of English words in advertising. He later told The Local in an interview that too many in Denmark suffer from “language anxiety”.