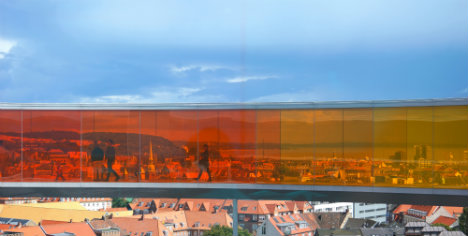 Aarhus has enjoyed a surge in plaudits from visitors. Photo: Marcus Hansson/Flickr

I took a brisk stroll along Vestergade in Aarhus recently. It was mid-afternoon and the sun shone on my back. A barista bowled out of a coffee shop to my left and served americanos to two young men. All three sported long beards. “So, you're going to NorthSide?” said one of the coffee drinkers to the other.

A bit further on, two girls sat smoking and chatting in thick Jutland accents outside a shisha bar. On the other side of the road, an empty pram waited outside a second hand shop and a tourist posed for a picture under a piece of graffiti covering the entire side of a house.

I walked on, past Vor Frue Kirke (Church of Our Lady) and sat down on a bench just before the equally house-sized 'Atomkraft, nej tak' (Atomic Power, No Thanks) mural, where the city centre proper starts. Three men in painting overalls ate sandwiches on an adjacent bench and an elderly couple walked by speaking German. A smell of fresh blossom came from the bushes and plants in the churchyard.

“Aarhus is never going to be truly smart,” an editorial in Berlingske newspaper taunted last month. “There's too much staggering along Vestergade,” continued the piece, in reference to a pop song from the 1980s.

The editorial was following up on the news that travel guide Lonely Planet had named Denmark’s second city the second best place to visit in Europe this year. Prior to Lonely Planet’s recommendation, Aarhus had also enjoyed glowing references from British newspapers The Telegraph and The Guardian, as well as a feature article in the New York Times’ travel supplement Travel and Leisure, which called the city the “whirring mind” of Danish culture.

Why all this sudden focus on a little town in eastern Jutland, population 330,000, with its down-to-earth attitude and eclectic take on the Danish language (“ikk’ å?”)

Aarhus has been chosen as a European Capital of Culture for 2017. This has and will bring a natural amount of new attention on the city from outside, and as Berlingske’s Lars Rix quite rightly points out, the tourist bureau has done a fine job of inviting international travel writers to the city, showing them around and putting a charm offensive into action. Aarhus will likely see an influx in visitors next year. Photo: News Oresund/newsoresund.org

But for those of us who see the city every day, the preparations go deeper than that. Work began in 2013 on a new light rail system, which will connect the harbour to the outlying areas and will see an inner city rail return to the town for the first time since trams stopped running in 1971. The construction work along Randersvej, one of the main traffic arteries leading out of the centre, makes it easy to keep track of progress.

An entire new neighbourhood, Aarhus Ø with its distinctive 'Iceberg' building, has risen along the docks. Seawater swimming, crossfit clubs, outdoor yoga and sushi have all taken off.

The old freight railway depot, Godsbanen, has been turned into a rough-and ready urban space for writers, actors, and cafés that raise money for refugees. The botanical gardens have been given a modern indoor visitor’s centre with greenhouses recreating various climates. The city's answer to New York's High Line is coming along nicely. The open-air museum Den Gamle By (The Old Town) has spread its horizons into the 1970s. Maybe it's not smart. But who cares about smart?

The admiration heaped upon the city by Travel and Leisure includes praise for the artistic nature of Aarhus, calling it “not a city of suits or glamour hounds but of creative thinkers, eccentrics, and travellers who’ve returned to roost”.

There may be enough creativity here to befit a cosmopolitan European city – and not ‘provincial Jutland’, as has long been Aarhus’ reputation – but this also underestimates the hardworking ethos that can be seen in the strides of progress being made, finally giving Aarhus the confidence to stop comparing itself with Copenhagen.

Comments like those by Rix, that attempt to put Aarhus back in its place by damning it with false praise (“The Old Town is both fun and exciting and the football team also has a certain entertainment value”), end up coming across as a bit out of touch.

Over the last decade, Aarhus has gained the NorthSide festival, Dokk1, ARoS’ Your Rainbow Panorama, the spectacular new Moesgaard Museum and a consistently sold-out city half-marathon. It hosted the European Under-21 Football Championships and has seen a slew of ethnic and Michelin restaurants open. The old Ceres Brewery was pulled down and a new college campus and residential towers built in its place, with the façade of the brewery retained for posterity.


Aarhus viewed from inside Olafur Eliason's Your Rainbow Panorama on top of the ARoS art museum. Photo: Per Skolander Thykjær Jensen

These are some of the things that are creating a buzz around town right now, the kind of buzz that makes you feel as if something big is going on around you, bigger than the modest size of the city itself.

When I think of Aarhus, though, I still think of walking through the Riis Skov forest with friends, sitting outside a café in the Latin Quarter drinking cava, or of running along the coast road and being able to see right across the calm silvery bay. Of walking from the university towards the city centre and being greeted by three different friends as they cycle past, heading up the hill.

Aarhus is a city that makes you feel wanted, while giving you the sense that it can comfortably carry on without you. I’ve not felt any inclination to leave during my decade here, and particularly not now that the hard work done by Aarhusianers to give their city an international reputation is paying off.

It is indeed one of Europe’s coolest cities, and it is still underrated. But probably not for much longer.