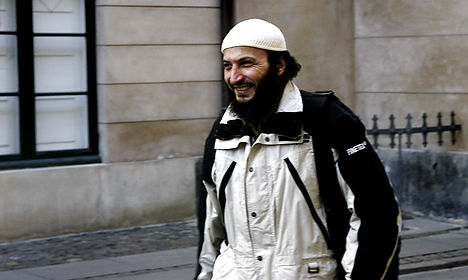 Threats to his safety in Morocco could mean that Said Mansour, shown here in 2004, will remain in Denmark despite losing his citizenship. Photo: Carl Redhead/Scanpix
The Supreme Court upheld a July 2015 ruling by the Eastern High Court that sentenced Mansour to  four years in prison and expulsion from the country with no chance to return.
Wednesday’s decision putting a final end to the Mansour case also marks the first time in Denmark’s history that someone has lost their citizenship for illegal activity.
The 56-year-old Danish-Moroccan was convicted for posting online threats, screeds, photos, links and messages that praise Osama bin Laden and call on his readers to join al-Qaeda’s al-Nusra front. Mansour has also posted videos of soldiers being executed in Syria and Iraq.
Additionally, he was convicted on charges related to the editing and publishing of three books considered to be terrorist propaganda.
The Danish press dubbed Mansour 'The Bookseller from Brønshøj' and he has also been viewed as a de facto 'PR man' for the terror group al-Qaeda.
In a separate case in 2007, Mansour became the first person in Danish history to be convicted of inciting terrorism. He served 3.5 years in prison on the previous conviction but was able to keep his citizenship.
Mansour is originally from Morocco but has lived in Denmark since 1984 and was granted Danish citizenship in 1988. He has maintained his Moroccan citizenship.
Mansour has said that he “will be executed” if he is returned to Morocco and the Supreme Court acknowledged on Wednesday that the terrorist might not be kicked out of Denmark.
“An eventual forced departure to for example Morocco will be determined by immigration authorities,” Supreme Court Justice Niels Grubbe said in court, according to Jyllands-Posten.
It’s possible that Mansour will remain in Denmark under the scheme known as tålt ophold, or ‘tolerated stay’, in which foreigners are allowed to remain in the country due to dangerous conditions or threats to their safety in their homelands.
Immigration officials will decide what to do with Mansour when he finishes his prison sentence.
The convicted terrorist at one point changed his name to Sam Mansour but has since changed it back to Said Mansour.
Url copied to clipboard!