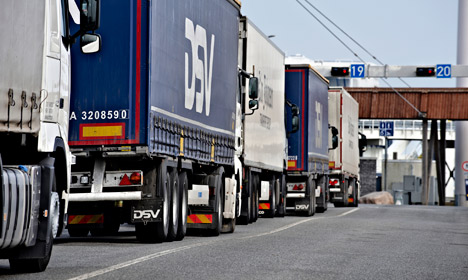 Eight people have on four separate occasions attempted to skirt ID controls on the Swedish-Danish border by hiding on or underneath trucks travelling by Øresund ferries from the Danish city of Helsingør to Helsingborg in Sweden, according to a report sent by the Danish justice ministry to the parliament's judicial committee.
The first incident reported to the Scandlines/HH Ferries company happened on April 12th, when two people tried to board the ferry by “lying down on some trucks' wheel axles”, according to Danish police cited in the official document. The pair ran off after they were discovered by drivers but were never caught by police.
Two days later, another two people were caught hiding under the wheel arches of a truck on board the ferry. They were handed over to Danish police and returned to Helsingør.
On April 17th a person ran off after being discovered by security staff while trying to hide underneath a truck. A day later a transport worker reported seeing three people trying to hide in a vehicle at the port in Helsingør.
The same month a Swedish police spokesperson told media that they had received reports of people successfully entering the country on trucks. Details were scarce at the time but police said members of the public had seen migrants under a truck on the E6 motorway in Helsingborg, while others were seen leaving a vehicle at a nearby rest stop.
According to the Danish justice ministry's report, which was written in mid-May but only grabbed headlines on Tuesday, no more attempts have been made since security was boosted and higher barbed wire fences put up at the ferry terminal in Helsingør. The extra security patrols have since been stepped down.
Last month Swedish police told The Local, after five asylum seekers for the first time successfully crossed the famous Øresund Bridge from Copenhagen to Malmö on foot, that the number of illicit border crossings may well be higher than previously known.
“There are gaps in the net, because the border control is peripheral, it's not one hundred percent. There are probably hidden statistics,” said police spokesperson Ewa-Gun Westford at the time.
The number of people seeking asylum in Sweden has dropped dramatically since the new ID and border controls were introduced, with an average of less than 500 a week showing up in the Nordic country, compared to almost 10,000 during the autumn.
Similarly, Denmark has seen seven straight weeks in which fewer than 100 people have sought asylum, marking a significant drop from the 641 who came in the first week of Danish border controls.
Both Denmark and Sweden recently announced that their respective border controls will remain in place until at least November.