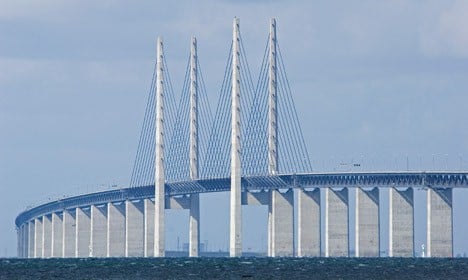 The Øresund Bridge connects Copenhagen to Malmö. Photo: Colourbox
Train traffic on the Øresund Bridge connecting the two Scandinavian countries was interrupted while Danish and Swedish police arrested the trio, Copenhagen Police said on Friday.
Their identities or nationalities were not immediately known.
According to Copenhagen Police spokesman Kristian Aaskov, there are now “near daily” incidents of asylum seekers trying to make it across the bridge on foot in an attempt to skirt ID checks introduced by Sweden earlier this year.
And the company that runs the Øresund Bridge said that the number of cases is on the rise.
“We have had around 55 incidents since January. They have increased in the past few weeks,” head of public relations Sanna Holmqvist told regional Swedish newspaper Sydsvenskan.
Heat sensors have already been installed in the railway tunnel connecting the Danish side of Øresund to the bridge to catch pedestrians. In April, when a lone walker was spotted walking on the motorway, Holmqvist told The Local that police also had access to a network of some 400 cameras.
But she said on Friday that they are currently looking into ways of making the process even more difficult, expecting the number of illicit attempted crossings to go up during the summer.
“More lighting and higher fences are things we're talking about. The problem is that those who try to flee this way have other considerations in mind than that it is dangerous to walk next to a speeding train. But we're trying to do everything to increase security,” she told Sydsvenskan.
The latest incident comes a week after a group of five asylum seekers for the first time made it all the way across the combined road and rail bridge into Sweden on foot.
Swedish police told The Local at the time that the number may well be higher, despite the photo identification controls and Swedish police being stationed at the border since last year.
“There are gaps in the net, because the border control is peripheral, it's not one hundred percent. There are probably hidden statistics,” said police spokesperson Ewa-Gun Westford.
The Øresund crossing, made famous in the Nordic Noir detective series The Bridge, allows drivers to travel at up to 90 kilometres an hour and includes a motorway tunnel as well as an open air road section. It is not open to pedestrians.
“It is forbidden, but it is also dangerous, both for the pedestrians themselves and for other travellers. If there is an accident there on the bridge, it could have devastating consequences,” said Westford last Friday.
The number of people seeking asylum in Sweden has dropped dramatically since the new ID and border controls were introduced, with an average of less than 500 a week showing up in the Nordic country, compared to almost 10,000 during the autumn.
However they remain unpopular with many commuters in the region, especially train travellers who have seen their journey times increase by around 40 minutes as a result.
Both Denmark and Sweden announced this week that their respective border control measures would remain in place through November.