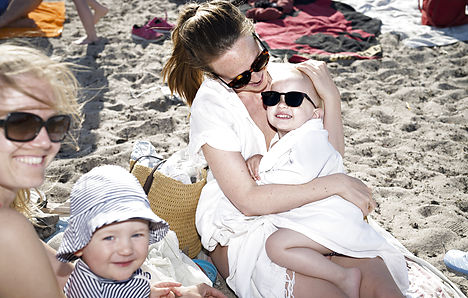 Mothers and their children enjoy the warm temps at Svanemøllen Strand on Thursday. Photo: Marie Hald/Scanpix
Already blessed with what was the warmest May in 23 years and a June that has started with an official heat wave, the forecast for the weekend and beyond promises more sunshine and high temperatures.
Friday temperatures were expected to reach up to 28C in parts of Denmark but if you had to spend the day at work, there is no need to fret. Saturday highs should be in the 20-27C range and both the Danish Meteorology Institute (DMI) and broadcaster DR promise that the beautiful summer weather that the country has been enjoying will continue through all of next week.

DMI said on Friday morning that parts of the country, including the Copenhagen area and western Jutland, have already officially recorded heat waves (varmebølge), which is defined by three consecutive days in which temperatures exceed 25C.
Climatologist Mikael Scharling said that more areas across the country would hit the designation over the next few days.
“As the prognoses look now, the heat wave could be nationwide but the most likely result is that it will remain a regional phenomenon that extends to even more regions,” he said on DMI’s website.
The other Danish term for a heat wave, hedebølge, is when there are at least three days with temperatures over 28C.
While what qualifies as a heat wave in Denmark would likely just be considered a nice cool summer day in more southerly locales, relief for sweating Danes is no further away than the nearest swimming hole. And with a recent report saying that Denmark’s bathing waters are cleaner than ever, there’s no reason not to jump on in.