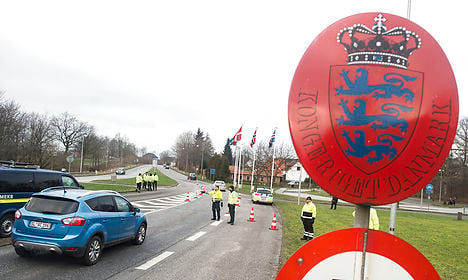 Denmark's border crossings with Germany are set to look like this throughout the summer. File photo: Claus Fisker/Scanpix

In May, after the controls were given a sixth 30-day extension, Denmark joined Sweden, Austria, Belgium, France and Germany in writing a letter to the European Commission calling for an extension of temporary controls at the internal borders of the Schengen area, as part of efforts to more closely monitor migration flows.

With the Commission now having approved the request, both Denmark and Sweden will extend their border control measures well into the autumn.

Denmark’s government has confirmed with the European Commission, EU Parliament and fellow member states that its emergency border control will remain in place until November 12th.

As has been the case with every previous extension, Integration Minister Inger Støjberg said Denmark's measures remain necessary.

“In the current situation, whereby no sustainable solution has yet been found for securing Europe’s outer borders, I am satisfied that we are able to maintain border control until November 12th, 2016. We must protect our own borders until mutually agreeable solutions are found at the EU level,” Støjberg said in a statement.

Schengen is the EU's free-travel passport-free area where until recently 400 million EU citizens were able to move around as they wished, while tourists could also travel by land across the zone unhindered.

However since last September, eight of the 26 member states in the area have introduced border checks to help stem and monitor the flow of migrants, under EU rules which allow countries to reinstate checks in certain circumstances.

The Danish government had previously placed 30-day extensions on its border control measures every month since putting them in place at the start of January.

Migration patterns in Europe have shifted since controls were stepped up last year, stopping thousands of refugees from taking the previously popular Balkan migration route to northern Europe.

The proportion of refugees reaching western Europe has also fallen as a result of the deal reached between the EU and Turkey and March, which sees migrants and refugees sent back from Greece to Turkey.

The number of asylum seekers arriving in Denmark appears to have dropped significantly since border controls were introduced, with 641 arrivals in the first week of January comparing to just 63 last week, according to police data compiled by the government.