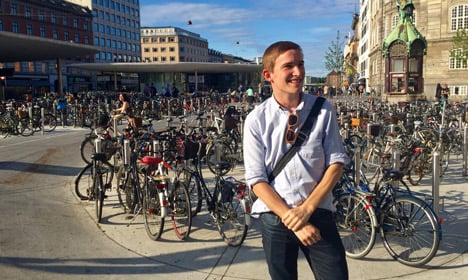 The appeal of a high quality, free education persuaded British-born expat Henrik Cullen to relocate to Copenhagen four years ago. Although he holds Danish nationality through his mother, he had never lived in Denmark before, making him a 'local expat' of sorts.

Since his arrival in Denmark, he has been busy obtaining his International Business degree from Copenhagen Business School and laying the groundwork for his career.

He said his choice to come to his mother's native country was motivated by several reasons.

“Most people in the United Kingdom don’t go abroad. There is this feeling that universities outside the UK and the US are not very good. I didn’t mind that. My brother came here to so I knew this was going to be my path,” Cullen told The Local.

Shortly after his arrival in Copenhagen, Cullen began working for Falcon.io, a highly successful Danish social media startup. At university he helped to create CBS Beer, which organizes beer tastings and says it wants to grow into the biggest student beer tasting group in the country.

But success hasn't always come easy, as exemplified by his failed foray into the service industry.

“I was fired from my first Danish job after nine days, and the second one after that I was let go after ten days,” Cullen confessed between chuckles.

Despite his Danish heritage, he said he also sometimes found it difficult to adjust to life in Copenhagen.

“When I first arrived I could not write Danish at all, I was verbally fluent but I mostly did not feel like speaking it since most people around me were better at it. But that has changed a lot since I first got here,” said Cullen. As a 'local expat', he said his social group is a mix of both Danes and internationals, something that is aided by the high number of foreign students at Copenhagen Business School.
Cullen plans to stay in Copenhagen for at least some years after the conclusion of his studies. The job environment in Denmark ­ – containing a healthy work-life balance that often includes beers in the office on Fridays, is very appealing to him.
“I think Denmark is a great place to live – if you find an apartment. It is a completely different place compared to the UK and not in a bad way. I would rather have a job that I enjoy than one making me a stupid amount of money, although this could also be a generational thing,” he said.
After studying in Australia as part of his CBS education, Cullen got a job with Newsio, a Danish startup based in Copenhagen. He was recently promoted to head of product and plans to remain there after graduation.

Although Cullen's transition to Copenhagen was helped greatly by being half Danish, he still considers himself an expat and not a Dane. His British accent remains notable, but when we caught up with him he seemed very much at home enjoying the favourite springtime activity of locals: sitting outside in one of the many parks Copenhagen offers and simply enjoying life.