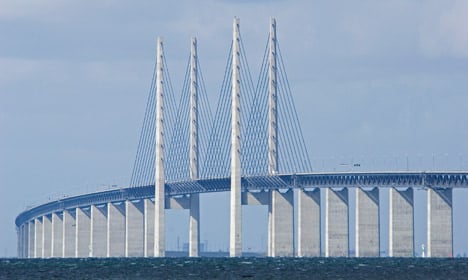 The Øresund Bridge connects Copenhagen to Malmö. Photo: Colourbox
It was revealed on Friday that five migrants, who the News Öresund news agency reported were aged under 18, made it into the road tunnel section of the bridge from Copenhagen Airport's train station on May 12th. From there, they continued onwards on foot into Sweden.
Police were notified after heat sensors in the tunnel alerted authorities, who stopped all train traffic.
“They were all young men and were handed over to the Migration Agency. We have had previous attempts on the Danish side, but they have all been caught by Danish police. This was the first time someone made the whole journey,” police spokesperson Ewa-Gun Westford told The Local.
See also: Danish police to stop 'deadly' asylum treks to Sweden
The attempts follow Sweden's decision in January to demand photo identification from all travellers from Denmark as part of efforts to more closely monitor the flow of asylum seekers between the two countries.
News Öresund, which first broke the news about the most recent incident, reported on Friday that more than 55 attempts to make the journey on foot have been made since the start of the year.
But Westford did not rule out that the number could be higher, despite Swedish police being stationed at the border since last year, in a move separate to the photo identification checks at Copenhagen Airport.
“There are gaps in the net, because the border control is peripheral, it's not one hundred percent. There are probably hidden statistics,” said Westford.
See also: Sweden-bound migrants pulled out of Danish waters
The Øresund crossing, made famous in the Nordic Noir detective series 'The Bridge', allows drivers to travel at up to 90 kilometres an hour and includes a motorway tunnel as well as an open air road section. It is not open to pedestrians.
“It is forbidden, but it is also dangerous, both for the pedestrians themselves and for other travellers. If there is an accident there on the bridge, it could have devastating consequences,” said Westford.
In April, when a lone walker was spotted walking on the motorway, Sanna Holmqvist, Head of Public Relations for the bridge, told The Local that police also had access to a network of some 400 cameras to help them detect pedestrians or any suspected criminal activities.
The number of people seeking asylum in Sweden has dropped dramatically since the new ID and border controls were introduced, with an average of less than 500 a week showing up in the Nordic country, compared to almost 10,000 during the autumn.
However they remain unpopular with many commuters in the region, especially train travellers who have seen their journey times increase by around 40 minutes as a result.