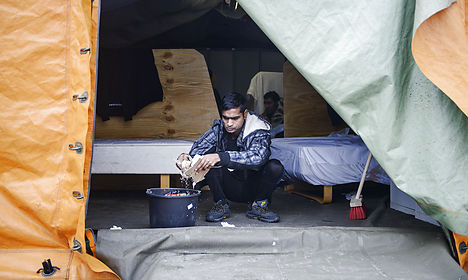 File photo of the refugee tent camp in Thisted. Photo: Sara Gangsted/Scanpix
As part of a hard-line migrant bill passed in January, and made infamous by the so-called ‘jewellery law’ clause, Denmark increased from one year to three years the waiting period for refugees before they can apply to bring their family members into the country.
Human rights experts protested vocally against the provision, saying it was a clear violation of the European Convention on Human Rights, the UN Convention on the Rights of the Child, and the UN Refugee Convention. Many predicted that a legal challenge to the restrictions was inevitable and a suit has now been filed by a group of five Syrian refugees.
See also: Under fire, Denmark moves ahead on hard-line migrant bill
“This is our last hope. If this case doesn’t help us, I think that my father will go back to my mother and siblings in Syria,” 16-year-old Anas Omar Alzein told Politiken.
Alzein and his father, 47-year-old Omar Mohammad Alzein have filed the suit along with three other Syrian refugees who want to bring their families to Denmark.
The Syrians’ lawyer, Christian Dahlager, is confident his clients will prevail.
“We need to put a stop to this illegal law. It is not worthy and I firmly and fully believe that we will win all the way through the court system and on up to the Supreme Court,” he told Politiken.
Støjberg has acknowledged that her hard-line reforms could fall foul of international conventions.
“We have gone to the limits of the conventions and it is true that there is a (risk) in relation to the issue of family reunifications. But it's a risk I'm willing to take,” she told news agency Ritzau in December.
She declined to comment on the Syrians’ lawsuit.
The three-year waiting period for family reunification applies to refugees who are granted temporary protections under a 2014 tightening of the nation’s asylum laws that was approved by the previous government.
The family reunification delay was just one of many restrictions introduced in January and in reality the wait for refugees to bring their family members to Denmark would be much longer than three years when case processing time is included.
Other changes introduced as part of the bill include the aforementioned (and thus far unused) ‘jewellery law’, the establishment of refugee tent camps, tougher language and employment criteria for obtaining permanent residency, shorter residence permits for refugees, higher case costs and new selection criteria for UN quota refugees that emphasizes their “integration potential”.