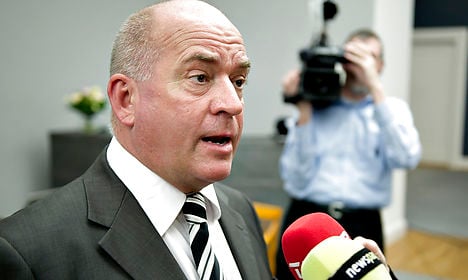 The State Attorney decided not to take the case further after deeming Espersen’s comments insufficient for any further inquiry, reports Jyllands-Posten.

Several police complaints were filed against Espersen, a senior DF spokesman and the head of parliament's Foreign Policy Committee, in November 2015 after he said that women and children should be legitimate targets for bombing campaigns against Isis.

Speaking two days after Isis claimed credit for the Paris attacks that killed at least 129 people, Espersen said that the West is carrying out its campaign like “gentlemen” but needs to get more aggressive if it is ever to win the fight against Isis, which is alternately known as the Islamic State or IS.

“We aren’t bombing spots where there are civilians, but we need to start doing so. IS hides behind women and children in villages and towns and they know that we are gentlemen won’t bomb them. That needs to end,” he told TV2.

When asked if that meant he thought the West should bomb women and children, Espersen said “yes, of course”.

The Danish Society of Islam (Islamisk Trossamfund) went as far as to accuse Espersen of encouraging acts of terror.

“These comments do not simply compromise everything Denmark stands for – a society brimming with human rights, freedom and tolerance. They are also direct encouragement to commit terror,” the organisation said in a statement.

Espersen is no stranger to controversy. More recently, the DF politician caused a major media stir in by refusing to apologise for his use of the word ‘Negro’ (Danish: neger) in defence of criticism of a DF promotional poster depicting an all-white family as synonymous with Danish values.

“I am mostly happy that the State Attorney has confirmed that my statements [regarding bombing civilians, ed.] are not in violation of the Geneva Convention. I said this many times myself,” Espersen told Jyllands-Posten.

According to Espersen, the Geneva Convention on the protection of children and civilians is “one of the few” conventions he supports.

“It was made into a big deal that I wanted to kill women and children. I clearly said that the number of civil casualties – including children – should be restricted, but that civilians are often tragic casualties of war,” Espersen told Jyllands-Posten.

The State Attorney cited Espersen’s reference to bombing civilian areas as a “necessary evil” – and therefore not the primary aim of any potential campaign – in its justification for dropping proceedings.

The report also included the conclusion that it was not possible to commit terror against Isis, since Isis is not a legitimate state.

“A campaign against a terror group can not be considered to have as its purpose the destabilisation or destruction of a country of other international organisation’s fundamental political, constitutional, economic or societal structures,” said the report.