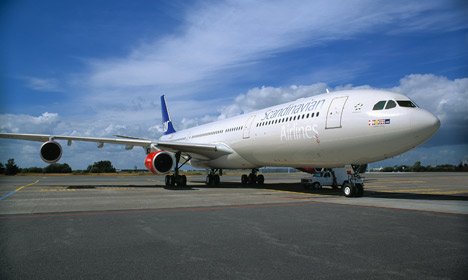 The technical issues will leave SAS ten aircraft short. Photo: SAS
As of Tuesday morning, 35 flights were cancelled due to the CRJ900 problem, which exclusively affects flights operated by SAS subsidiary Cimber.
A statement on SAS’s website says there will be “some cancellations to and from Copenhagen during May 22-24” but Danish news agency Ritzau reported that SAS flights are likely to be affected through Thursday.
SAS spokeswoman Anna Vibeke Nielsen told check-in.dk at the CRJ900 aircraft have a reported problem with landing gear, leading SAS to order a technical inspection of all of it the affected planes.
Nielsen told Ritzau that SAS is trying to temporarily increase its capacity through the use of other airlines’ aircraft in order to keep the cancellations to a minimum.
SAS wrote on its website that passengers needing to rebook or wishing to request a refund should contact their travel agent or SAS’s customer service.
Roughly 40 flights were grounded by the same problem on Monday.
SAS is fifty percent owned by the Danish, Norwegian and Swedish states.