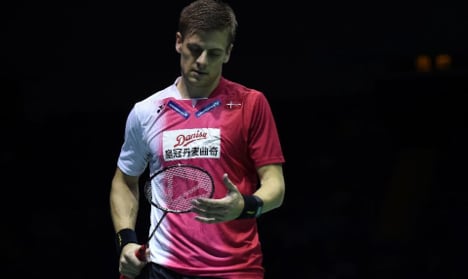 Denmark's Hans-Kristian Vittinghus reversed the tide midstream in a dramatic comeback against the talent-rich Malaysians after the Danes dropped the two first matches of the semi-final in the eastern Chinese city of Kunshan.

Goh V Shem and Tan Wee Kiong maintained the lead with an exhausting pace against Mathias Boe and Mads Conrad-Petersen with leaping overhead smashes in their 21-18, 21-18 win.

Down two points, Vittinghus wrestled back momentum from the Malaysians by remaining patient during lengthy rallies with Iskandar Zulkarnain Zainuddin, whittling away his opponent's stamina for the 21-18, 21-18 comeback.

“I stayed calm and stuck to my game plan — that's a lot easier said than done,” Vittinghus said after the match.

With the Chinese fans firmly behind them, Kim Astrup and Anders Skaarup Rasmussen kept the Danes in the tournament with a 10-21, 21-8, 21-13 win over Koo Kien Keat and Tan Boon Heong.

In the dramatic fifth match of the tie, Emil Holst clinched the Danes' final berth with a 21-15, 21-18 win over Chong Wei Feng, bringing his teammates rushing onto the court.

Denmark are set to face Indonesia on Sunday in the Thomas Cup final.