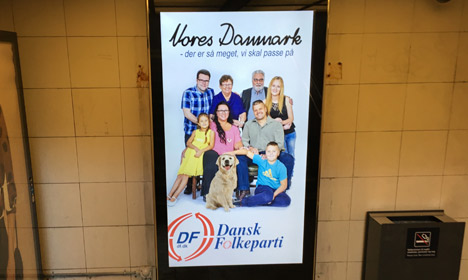 DF's 'Our Denmark' campaign as seen at Nørreport Station. Photo: Justin Cremer
The ‘Our Denmark’ campaign from the anti-immigration Danish People’s Party (DF) has been the talk of Denmark for weeks but has in recent days taken a turn toward the absurd.
First, DF spokesman Søren Espersen decided to fight back against critics of the campaign who accuse the party of a barely-hidden racist message with its photo of an all-white family and the phrase: ‘‘Our Denmark – there is so much we need to take care of’.
See also: Why Danes are currently discussing 'Our Denmark'
The veteran politician, however, defended the ads with the use of a word that many in Denmark find racist.
“Personally, I’m colour blind so I don’t even know what colour they [the people featured in the campaign] are. …We could have inserted a Negro [into the campaign], and so what? What would that change? I think in general, people should get into a summer mood!” he told TV2.
Those comments re-ignited a debate over some Danes’ continued use of the word neger, which many would contend translates as the more derogatory n-word.
DF itself declared in 2013 that the world ‘neger’ should no longer be used following an uproar over a local politician’s lament that money for the island of Bornholm was being redirected to “the Negroes”.
Espersen gave decidedly mixed messages about his word choice, first writing on Twitter that he “was sorry if I have offended” but then telling TV2 that he refusing to apologize.

“No, I won’t. I will use that word again and again on other occasions. It lies deep within my vocabulary. I’m an an old man and that word is very comprehensive,” he said.
Just when it seemed that a story about a poorly-Photoshopped advertising campaign couldn’t get any stranger, it did. Thanks to Espersen’s wife, Yvette.
She told TV2 that she plans to sue the people behind two popular counter-campaigns for violating a copyright she has on the DF poster’s font.
“There is nothing to discuss. It [the font] is something I made by hand. It’s a font that I designed and it is something that DF uses in all of its campaigns. I sold the font to DF and according to copyright law, you can’t just steal it,” Yvette Espersen said.
Paradoxically, DF itself has been accused of 'stealing' the tag line in its campaign by songwriter Bjarne Jes Hansen, who says that DF's line 'det er så meget, vi skal passe på' is a direct and unsanctioned rip-off of his lyric 'det er så meget, man skal passe på'. The party faced a similar accusation in 2008 when it ran a campaign called 'Giv os Danmark tilbage!' (Give us Denmark back) that was clearly lifted from late singer Natasja's hit song 'Giv mig Danmark tilbage'.
In response to Yvette Espersen's threat, the creator of one of the popular counter-campaigns responded by re-releasing her image with a new font.
The creator of a second counter-campaign said he wouldn’t be changing his image, for now anyway.
“I’m very surprised because I nearly stood face-to-face with [Søren Espersen] who said that our campaign was fun and you hear [DF leader Kristian] Thulesen Dahl say that one should embrace the summer mood and then this [threat of legal action] suddenly shows up,” Alexander Nicolas Truelsen told TV2.
As of Thursday morning, his multi-cultural version of the ‘Our Denmark’ image was still on Facebook, where it had been shared over 7,000 times.