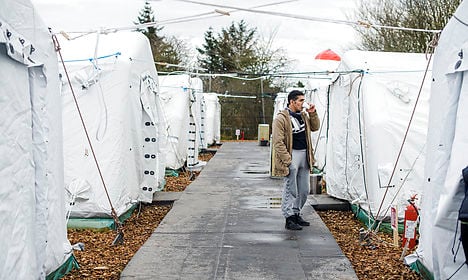 The man pictured here is a resident of the refugee tent camp in Thisted and is not involved in the Næstved incident. Photo: Sara Gangsted/Scanpix
“In recent days there has been a relatively large focus on the asylum camp in Næstved. When so many people are gathered in one place, it is hard to avoid friction. But the 34-year-old has gone significantly over the line in terms of what we can accept and he must now of course face the consequences of his actions,” police inspector Kim Kliver said in a press release.
South Zealand Police confirmed to TV2 that the man in question is the asylum seeker shown in videos released by Information newspaper being restrained by staff at the refugee tent camp. Those videos and reports of physical and emotional abuse led to the camp’s leader, Kent Nielsen, being fired from his position.
See also: Danish asylum centres under scrutiny after abuse report
But Radio24syv reported on Tuesday that the 34-year-old asylum seeker has a history of abusive behaviour and aimed a series of threats at the fired Nielsen, other personnel and fellow residents of the camp.
According to documents obtained by the radio station, the man was brought to the tent camp in Næstved after officials at a Red Cross centre determined that he was a potential danger to both women and children. After arriving at the tent camp, the Syrian was involved in a number of incidents in which he threatened and/or verbally abused residents and staff.
Jan Olsen, a Danish Emergency Management Agency (Bered­skabs­sty­rel­sen) employee responsible for delivering food to the camp, told Radio24syv that the man “is a person who could create a civil war with just two people”.
“Even toward my kitchen staff, he was a very brash and provocative type who constantly seeks conflict and discord. He has expressed himself sexually toward the female [staff members] and would stand at the fence and yell at them when they went home at night,” Olsen said.
“He seeks out conflict from morning to night,” he added.
Radio24syv reported that prior to the incident that was caught on camera, the 34-year-old man had threatened to kill the now fired camp leader before attempting to break a window with the apparent intention of using a glass shard to attack the employee.
Nielsen told Radio24syv that he could not comment in detail to a confidentiality clause, but confirmed that the asylum seeker in question had threatened to kill him.
“He threatened my life and tried to hit me, upon which I attempted to pacify him by twisting his arm. However, he was acting out and was very aggressive so we put him in a leg lock. I don’t believe that I used too much force, but rather the amount of force that was necessary,” he said.
In addition to facing charges for threatening staff and residents, the 34-year-old Syrian is also being charged with violence for pushing a cameraman.