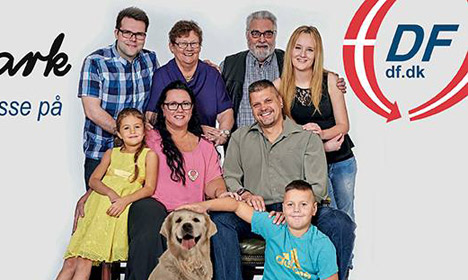 The DF ads led to a number of counter campaigns challenging the party's definition of 'Danishness'. Photo: Dansk Folkeparti
A campaign from the anti-immigration Danish People’s Party (DF) is nearly inescapable these days. The ad showing three generations of DF voters can be seen everywhere from train stations to billboards and flourishes around the internet.
The ad’s models smile at the camera under the slogan ‘Our Denmark – there is so much we need to take care of’ (Vores Danmark – der er så meget, vi skal passe på), while a young boy’s hand rests awkwardly on a dog that was digitally inserted into the picture.
The campaign was initially mocked for the poor Photoshop, which DF openly admitted, but criticism soon moved on to more serious issues. Many accused the campaign of being empty populism at a time when Denmark faces societal challenges, as demonstrated by a widely shared photo of a homeless man sleeping under the campaign poster:
But the main criticism directed at the campaign was that it lacked the diversity that exists in modern Danish society. DF was accused of running an exclusionary campaign, prompting a number of Danes to answer with their own versions of the ad that challenged the party’s definition of what it means to be “Danish” in 2016.
Aarhus resident Birgit Bjerre and her husband were taking a ride in a taxi on Friday when they saw three billboards with DF’s ‘Our Denmark’ campaign. They asked their driver, Hamit, how he felt about the ads.
Bjerre wrote on Facebook that Hamit initially said he wasn’t bothered by the ads, before admitting that it made him said.
“We agreed that those billboards made us sad, embarrassed and angry because one party does not have a patent on defining what Denmark is. We certainly won’t just bow our heads and look at it, so we agreed to get some people together and take a photo of Our Denmark to show that we already take care of it – together,” she wrote.
The photo she posted of the two families was shared nearly 3,000 times.
Another photo hit Facebook on Monday, showing a diverse and multi-cultural group of Danes posing under DF’s original campaign slogan.
“‘There is so much we need to take care of.’ That is exactly right. We need to take care of our democracy, our unity, our diversity. And first and foremost we need to take care of each other, because we are all in the same boat,” Alex Ferlini, one of the creators of the ad, wrote in a Facebook post that has been shared nearly 5,000 times.
DF press chief Søren Søndergaard said he was surprised that the party’s campaign has spurred so many reactions.
“What have we done to offend anyone? We used photos of Danish People’s Party members and a dog. We write that we need to take care of Denmark and what we particularly consider worth taking care of,” he told Jyllands-Posten.
DF's immigration spokesman, Martin Henriksen, also brushed off the criticism.
“It's definitely not something that is going to make me lose sleep at night,” Henriksen told TV 2.