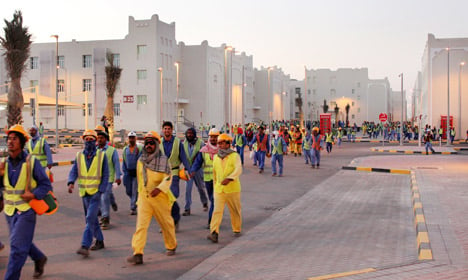 Death and workers' rights in #Qatar. Players from @Spillerforening speak out, inc @HgliTom, #Kvist and @MadsOland.https://t.co/hVB0Tov2jX

“The fact that thousands must die to build 12 fine stadiums for us has nothing to do with football,” said Denmark's William Kvist, also from FC Copenhagen, in the video, which was produced by by Danish players' association Spillerforeningen.
Mads Oland, director of Spillerforeningen and a FIFPro board member said the situation in Qatar could be avoided “if FIFA requires that social clauses be observed.”
The issue of deaths among migrant labourers helping build stadiums for Qatar's $30 billion tournament has long proved controversial.
Critics have claimed that 1,200 workers have already died and up to 4,000 could perish before the World Cup begins, a figure vehemently denied by Qatar.
The country currently employs about 5,100 workers on World Cup sites, a number that will peak at 36,000 by 2018.
An Amnesty International report published in March accused Qatar of abusing World Cup workers.
FIFA boss Gianni Infantino said last month that the organisation will establish a body to monitor working conditions for labourers at Qatar's World Cup stadiums and insisted the tournament would stay in the Gulf.