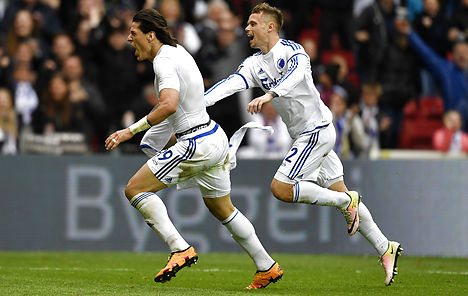 FCK's Frederico Santander and Peter Ankersen celebrate Monday's win over Nordsjælland. Photo: Lars Møller/Scanpix
A brace for Paraguayan forward Federico Santander gave FC Copenhagen a fourth consecutive victory, and took them an unassailable ten points clear, meaning that they succeed last season's shock winners Midtjylland as champions.
It is a first Danish Superliga title for former Wolverhampton Wanderers manager Stale Solbakken since he took over as head coach in 2013, and it moves FC Copenhagen past rivals Brøndy's tally of league  championships.
The record for Superliga titles of 15 belongs to Copenhagen side KB which merged with another club from the capital B1903 in 1992 to form FC Copenhagen.