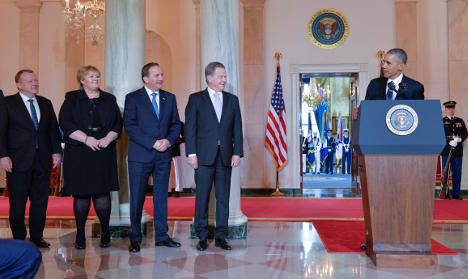 As tensions with Moscow spike over military deployments in Eastern Europe, Obama hailed the US partnership with Russia's near neighbours in Denmark, Iceland, Finland, Sweden and Norway.

Obama said the six nations agreed on the need for a European order not based on might.

“We believe that our citizens have the right to live in freedom and security, free from terrorism, and a Europe where smaller nations are not bullied by larger nations.”

As Obama was speaking, Putin warned he will consider measures to “end threats” from US anti-missile systems that were recently activated in Romania.

Tensions with Russia have reached levels not seen since the Cold War.

Russian-backed militants have also taken control of swaths of the eastern part of the country.

Meanwhile, Russia and the West have clashed over Moscow's military intervention in Syria and its support for the regime of Bashar al-Assad.

Russian aircraft now routinely harass NATO and Nordic military assets near the border and beyond.

Russia has darkly warned against Sweden and Finland joining NATO, an issue that is being debated in both countries.

Putin did not specify which actions he will take, but according to Steven Pifer of the Brookings Institution, a Washington think tank, they are likely moves that would have come anyway.

“The Russians will make their displeasure known. The West should anticipate irate declarations of military countermeasures,” he said.

“Categorizing its military programs as countermeasures to Western military deployments has a long tradition with the Kremlin.”

NATO leaders — including Obama — will meet in Warsaw next month.

NATO
Norway and Denmark give guarantee to Nordic neighbours over Nato bids
Url copied to clipboard!