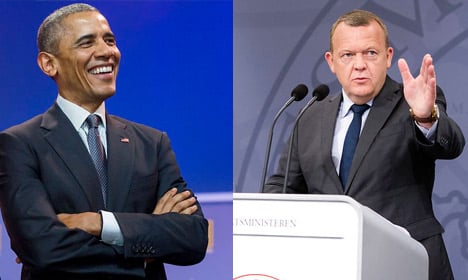 Few can match Obama's speaking skills, but Rasmussen will give it a go on Friday. Photos: Saul Loeb and Jens Astrup/Scanpix
That means Rasmussen will have to compete with US President Barack Obama, who has been called one of the best orators in US presidential history and whose one-liners have earned him the title of ‘comedian-in-chief’.
Upon Rasmussen’s arrival in Washington DC on Thursday evening, he declined Jyllands-Posten’s request to reveal if he had any jokes of his own up his sleeve.
Instead, he focused on the serious issues that will be discussed when he joins the leaders of Sweden, Norway, Finland and Iceland for meetings with the US president.
See also: Norway PM to focus on Arctic and trade at White House
“The state visit is an expression of the fact that many of the things we stand for in the Nordic region and in the Scandinavian countries are in great demand here [in the US]. I am looking forward to discussing energy, climate and security,” the PM said.
The White House has said that the US-Nordic Leaders Summit will “highlight America’s continued commitment to European security, trans-Atlantic trade and the promotion of common democratic values”.
“This summit will be an opportunity to continue our close collaboration with the Nordic countries on a range of issues,” the White House said in a statement, referring also to the environment, “Arctic issues… and addressing the migration and refugee crisis in a humane and orderly way.”
See also: Danish PM in US: Denmark is not socialist
Denmark has found itself a frequent topic in the ongoing US presidential campaign and Rasmussen used his last stateside trip to shoot down the American perception that the Nordic model is “some sort of socialism”.
“Denmark is far from a socialist planned economy. Denmark is a market economy,” Rasmussen told an audience at Harvard’s Kennedy School of Government.
“The Nordic model is an expanded welfare state which provides a high level of security for its citizens, but it is also a successful market economy with much freedom to pursue your dreams and live your life as you wish,” he added.
See also: Swedish PM to teach Obama about the 'Nordic model'
In addition to meeting with Obama and being treated to a state dinner – in which he may or may not try to match his host’s speaking skills – Rasmussen is also using his time in Washington to reestablish the Congressional Friends of Denmark caucus to promote Danish business interests in the US.
Rasmussen met with the Democratic Whip of the US House of Representatives, Steny Hoyer, to pursue that issue on Thursday evening.

Thank you @WhipHoyer for key role in launching #congressionalfriendsofdenmark. Opens doors for DK businesses in US pic.twitter.com/uOCj7Qf71B

“Danish businesses have some core competencies in areas in which the American society is facing major challenges, for example health care and global warming. Denmark’s leading position in these areas must be fully exploited and I think the network can help companies get more direct access to the world's largest market,” the Danish PM said ahead of his trip.
Friday's state dinner is just the 12th of Obama's administration. The Washington Post has details about the menu as well as the decor and entertainment.