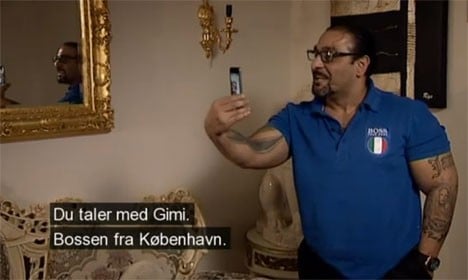 "You're speaking with Gimi. The boss of Copenhagen". Levakovic as seen in a clip from a TV2 documentary about his family. Screenshot: TV2
Levakovic became nationally-known thanks to a TV2 documentary entitled ‘The Gypsy Boss and His Notorious Family’ (Sigøjnerbossen og hans berygtede familie). A Roma from Croatia, Levakovic is the head of what for many years has been called ‘Denmark’s most criminal family’ and is the self-declared ‘boss’ of the nation’s Romas.
In August he was sentenced to 15 months in prison followed by expulsion from Denmark following a conviction on charges of having a loading pistol and making death threats. Two months later, the Eastern High Court reversed the expulsion order, citing Levakovic’s sole custody of two minor children. That decision led to a national outrage and a decision by the public prosecutor’s office (Rigsadvokaten) to pursue Levakovic’s expulsion at the nation’s highest court.
On Thursday, the Supreme Court ruled against the public prosecutor and said that the 46-year-old Croatian citizen should be allowed to remain in Denmark.
The court said that expelling Levakovic would be in violation of the EU’s Convention for the Protection of Human Rights.
“The Supreme Court finds that despite the severity of his current crime and despite his criminal career, [the request] for deportation would be a disproportionate infringement on his rights in respect to his private and family life,” the decision read.
The Levakovic family first arrived in Denmark in 1972 and most of the 45-member clan have never had jobs and have instead lived off a mix of welfare benefits and crime. Three members of the Levakovic family have previously been sent back to Croatia for their crimes, which include home robberies, violence and rape.
According to news agency Ritzau, Gimi Levakovic has been convicted more than 20 times for various crimes since he turned 18. He has spent more than seven years in prison.
News of the court’s decision was greeted by outrage by politicians of all stripes and Prime Minister Lars Løkke Rasmussen said his cabinet would look at strengthening Denmark’s deportation rules.
Url copied to clipboard!