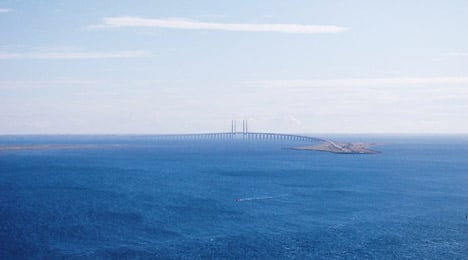 The men were found in the water between Saltholm and Peberholm. Photo: Hugh Llewelyn/Flickr
Two of the migrants were in hospital after authorities pulled them from icy waters off Denmark on as they tried to reach Sweden to ask for asylum, Danish police said.
The rescued migrants were part of a group of four who attempted crossing the strait between Denmark and Sweden, where the water is around 8C.
“There were two who were taken to hospital after the rescue operation,” police spokesman Henrik Svejstrup told local Danish broadcaster TV 2 Lorry.
“One was put on a respirator, but we expect him to be taken out of the coma” later on Tuesday, he added.
The rescue operation was carried out off the coast of the sparsely populated island of Saltholm, around four kilometres off the Danish coast and near the Øresund Bridge.
An island resident told TV2 that two of the men knocked on the door of a local house on Saltholm under the false impression that they had reached Sweden. The men spoke poor English but said they wanted to seek asylum.
They asked the resident for a glass of water and then left the home. The sea rescue operation got underway shortly thereafter.
A Copenhagen Police spokesman told TV2 that the four men were rescued between Saltholm and the artificial island of Peberholm.
“Four people were swimming around in the water. Three of them came onto land at Saltholm on their own and the fourth person was raised out of the water by a helicopter,” vice inspector Henrik Møller Jakobsen said.
Jakobsen said that an investigation was underway, but did not release any information about the nationality of the four men. Police did say, however, that the men had most recently been living at Center Sandholm, the largest asylum centre in Denmark.
“We are trying to figure out what happened. The first order of business is to determine if their papers are legitimate and how they got out there. Did they sail, were they brought out to Peberholm or did they get their some other way?,” Jakobsen said to Ritzau.
Copenhagen Police said last month that dozens of people have tried to walk over the high-speed Øresund Bridge that connects Copenhagen to Malmö in an effort to avoid Sweden’s ID controls, which were implemented in January after the country took in 160,000 asylum seekers in 2015.
The crossing, made famous in the Nordic Noir detective series The Bridge (Broen), allows drivers to travel at up to 90 kilometres an hour and includes a motorway tunnel as well as an open air road section.
Copenhagen Police have installed new warning signs designed to deter walkers as well as heat sensors to better allow them to trace people making the potentially deadly journey.
Ferry operators have also warned that growing numbers of asylum seekers are trying to get to Sweden from Denmark by clinging to the undersides of trucks boarding the ferry in Helsingør in an apparent attempt to avoid the ID checks.